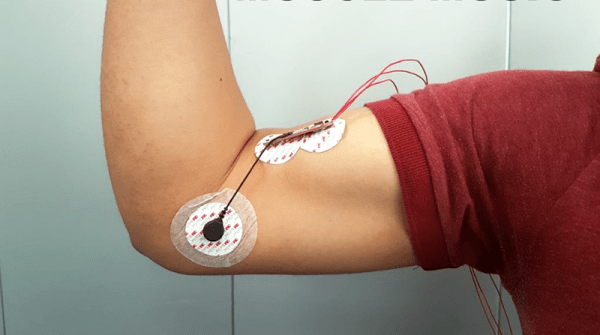 Inspired by an old Old Spice commercial, [Juliodb96] decided he too wanted to make music by flexing his muscles. An Arduino and a MyoWare sensor did the trick. However, he also tells you how to make your own sensors, if you are so inclined. You can see the instrument in action in the video below.

If you use the ready-made MyoWare sensors, this is a pretty easy project. You just respond to sensor input by playing some notes. If you decide to roll your own, you’ll have some circuit building ahead of you.

In particular, the signal conditioning for the sensors involves filtering to eliminate signals not in the 20 Hz to 300 Hz passband, several amplifiers, a rectifier, and a clipper. This requires 3 IC packages and a handful of discrete components.

Unlike the original commercial (see the second video, below), there are no moving parts for actuating actual instruments. However, that wouldn’t be hard to add with some servo motors, air pumps, and the like. This may seem frivolous, but we had to wonder if it could be used to allow musical expression for people who could not otherwise play an instrument.

This isn’t the first time we’ve seen the MyoWare in action. We’ve even talked about signal processing that is useful for this kind of application. 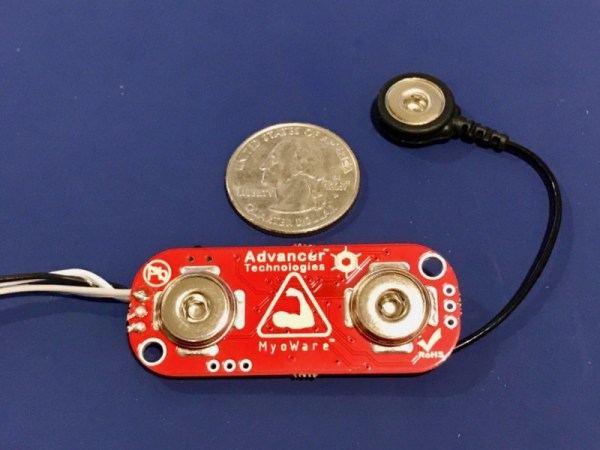 What with wearable tech, haptic feedback, implantable devices, and prosthetic limbs, the boundary between man and machine is getting harder and harder to discern. If you’re going to hack in this space, you’re going to need to know a little about electromyography, or the technique of sensing the electrical signals which make muscles fire. This handy tutorial on using an Arduino to capture EMG signals might be just the thing.

In an article written mainly as a tutorial to other physiatrists, [Dr. George Marzloff] covers some ground that will seem very basic to the seasoned hacker, but there are still valuable tidbits there. His tutorial build centers around a MyoWare Muscle Sensor and an Arduino Uno. The muscle sensor has snap connectors for three foam electrodes of the type used for electrocardiography, and outputs a rectified and integrated waveform that represents the envelope of the electrical signal traveling to a muscle. [Dr. Marzloff]’s simple sketch just reads the analog output of the sensor and lights an LED if it detects a muscle contraction, but the sky’s the limit once you have the basic EMG interface. Prosthetic limbs, wearable devices, diagnostic tools, virtual reality — the possibilities are endless.

We’ve seen a few EMG interfaces before, mainly of the homebrew type like this audio recorder recruited for EMG measurements. And be sure to check out [Bil Herd]’s in-depth discussion of digging EMG signals out of the noise.