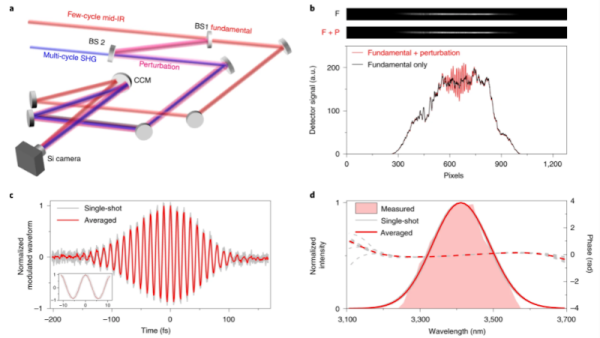 What’s better than a 100MHz scope? How about an optical one? Researchers at the University of Central Florida think that’s just the ticket, and they’ve built an oscilloscope that can measure the electric field of light. You can find the full paper online.

Reading the electrical field of light is difficult with traditional tools because of the very high frequency involved. According to [Michael Chini], who worked on the new instrument, the oscilloscope can be as much as 10,000 times faster as a conventional one.

The measurement of a few cycles of light requires some special techniques as you might expect. According to the paper:

[A]n intense fundamental pulse with a central wavelength of 3.4 µm creates charge packets in the pixels of a silicon-based image sensor via multiphoton excitation, leading to detectable photocurrents. The probability of excitation is perturbed by the field of a weak perturbation pulse, leading to a modulation in the excitation probability and therefore in the magnitude of the detected photocurrent. We have previously shown that, for collinear fundamental and perturbation pulses, the dependence of the modulation in the excitation probability on the time delay between the two pulses encodes the time-varying electric-field waveform of the laser pulse. Here, by using a crossed-beam geometry with cylindrical focusing, we map the time delay onto a transverse spatial coordinate of the image sensor chip to achieve single-shot detection.

Did you get that? In other words, instead of measuring the light pulse directly, they measure the change it makes on another known signal. We think…

Unless you’re moving high-speed data across fiber optic, we aren’t sure you really need this. However, the concept is intriguing and not previously unheard of. For example, we’ve seen capacitance meters that measure the change in frequency caused by adding an unknown capacitor into an existing oscillator.

If you want something more conventional, maybe look at some popular scopemeters. Of course, something this high speed might be able to apply time-domain reflectometry to fiber optics. Maybe.