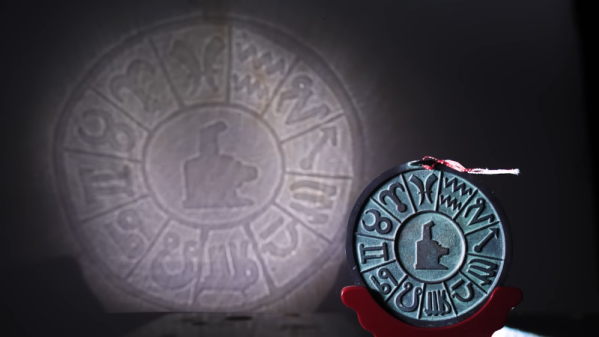 One of the Star Trek movies has a McGuffin called “transparent aluminum.” While magic mirrors aren’t really transparent, it appears that way to a casual observer. If you haven’t seen one of these, they are polished metal mirrors with a pattern embossed on the back. When you shine a point source of light on the mirror, however, the reflection matches what is on the back of the mirror. Is it transparent? No, and the video by [Steve Mould] below explains what’s really going on.

The reality is that very subtle variations of the surface produce the image. You need some understanding of optics and calculus to fully understand what’s going on.

END_OF_DOCUMENT_TOKEN_TO_BE_REPLACED 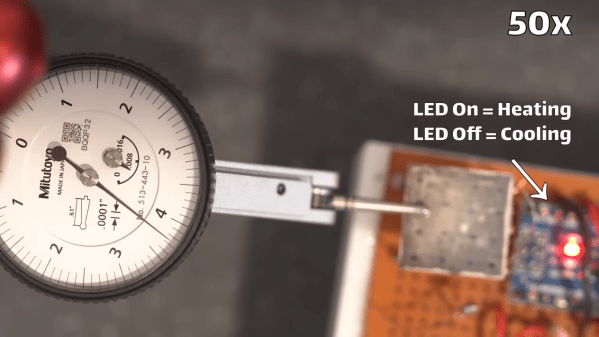 The term “adaptive optics” sounds like something that should be really complicated and really expensive. And in general, the ability to control the properties of optical elements is sufficiently difficult enough that it’s reserved for big-science stuff like billion-dollar space telescopes.

But that doesn’t mean there aren’t quick and dirty adaptive optics that are suitable for the budget-minded experimenter, like this thermally deformable mirror. As [Zachary Tong] explains, this project, which started quite some time ago, is dead simple — a 4 by 4 array of through-hole resistors stand on end, and these are attached to a glass coverslip that has been aluminized on one side. An Arduino and a couple of shift registers make it possible to individually address each of the 16 resistors in the array. Passing a current through a resistor heats it up a bit, leading to thermal expansion and a slight deflection of the mirror sitting on top of the array. Controlling which resistors heat up and by how much should lead to deformation of the mirror surface in a predictable way.

The video below shows some of [Zach]’s experiments with the setup. Unfortunately, he wasn’t able to fully demonstrate its potential — the low-quality mirror didn’t cooperate with his homebrew interferometer. He was, however, able to use a dial indicator to show deflection of the mirror in the 2- to 3-micron range by heating the array. That alone is pretty cool, especially given the dirt cheap nature of the build.

As for practical uses, don’t get too excited. As [Zach] points out, thermal systems like this will probably never be as fast as MEMS or piezoelectric actuators, and many use cases for adaptive optics really don’t react well to added heat. But changing the shape of a mirror with air pressure is another thing.

END_OF_DOCUMENT_TOKEN_TO_BE_REPLACED 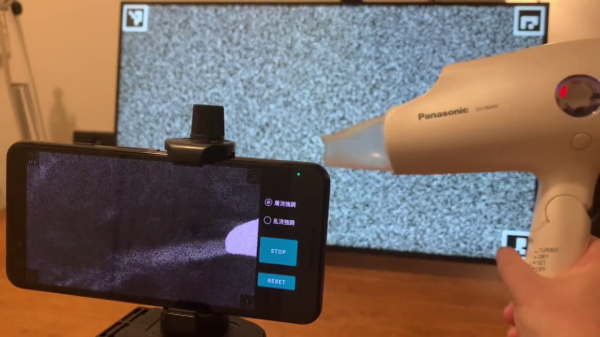 Multiple people have recently shared this exciting demonstration (nitter) with us – visualizing airflow using a smartphone, called ‘background-oriented schlieren’. On a hot summer day, you might see waves in the air – caused by air changing density as it warms up, and therefore refracting the light differently. Schlieren photography is an general set of techniques for visualizing fluid flow, but of course, it can also be applied to airflow. In this case, using some clever optical recognition tricks, this schlieren method lets you visualize flow of air using only your Android smartphone’s high resolution camera and a known-pattern printed background! END_OF_DOCUMENT_TOKEN_TO_BE_REPLACED 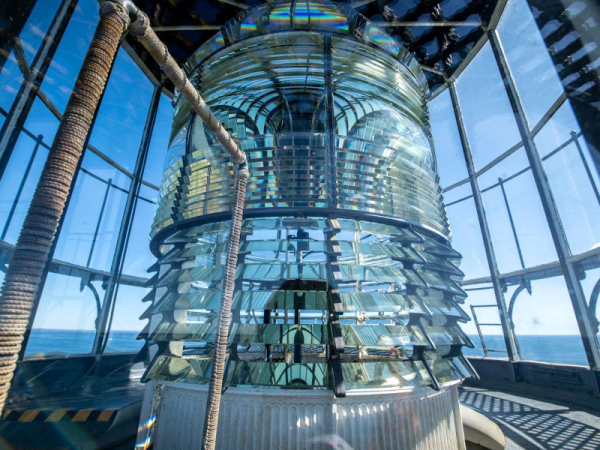 If you are a Hackaday reader, you probably know what a Fresnel lens is. You find them in everything from overhead projectors to VR headsets. While it seems commonplace now, the Fresnel lens was an important invention for its day because it revolutionized maritime navigation and, according to a post over at IEEE Spectrum, that was the driving force behind its invention. In fact, the lens has been called “the invention that saved a million ships“.

The problem stems from issues in navigation. Navigating by the sun and the stars is fine, but not workable when you have heavy cloud cover, or other reasons you can’t see them. A lighthouse often marked an important point that you either wanted to navigate towards or, sometimes, away from.  Sure, today, we have GPS, but for a long time, a lighthouse was your best bet.

END_OF_DOCUMENT_TOKEN_TO_BE_REPLACED 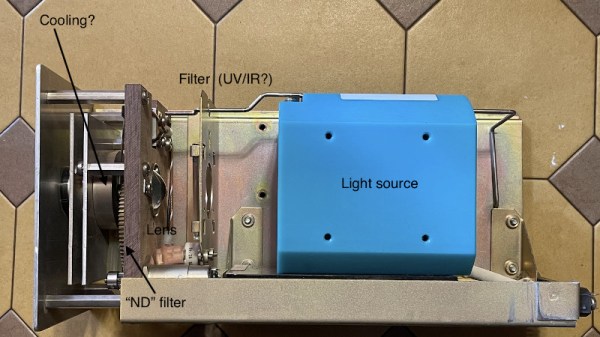 While originally designed to put light where the sun don’t shine for medical purposes, [Nava Whiteford] says the Wolf 5151 Xenon endoscopic light source also works well for microscopy and general optical experiments, especially since you can get them fairly cheap on the second hand market. His cost just $50 USD, which is a steal when you consider a replacement for its 300 watt Olympus-made bulb will run you about 200 bucks alone.

That said, [Nava] recently moved on to a more compact light source, and figured that was a good enough excuse to crack open the Wolf 5151 and see what makes it tick. In this particular post he’s just looking at the optical side of things, which is arguably the most interesting aspect of the device. Helpfully, the whole assembly is mounted to its own sled of sorts that can be pulled from the light source for a closer examination.

Beyond that expensive bulb we mentioned earlier, there’s a thick piece of what appears to be standard plate glass being used as an IR and UV filter. [Nava] suspects this component is responsible for keeping the rest of the optics from overheating, which is backed up by the fact that the metal plate its mounted to appears to feature a K-type thermocouple to keep an eye on its operating temperature. Forward of that is a unique aspheric lens that features a rough spot to presumably scatter the light at the center of the beam.

Our vote for the most fascinating component has to go to the Neutral Density (ND) filter, which is used to control the intensity of the light. In a more pedestrian light source you could just dim the bulb, but in this case, the Wolf 5151 uses a metal disk with an array of holes drilled into it. By rotating the disc with a DC motor, the lens can be variably occluded to reduce the amount of light that reaches the aperture, which connects to the fiber cable.

While it’s perhaps no surprise the build quality of this medical gear is considerably beyond the commercial gadgets most of us get to play with, it still doesn’t hold a candle (no pun intended) to the laser module pulled from a Tornado jet fighter. 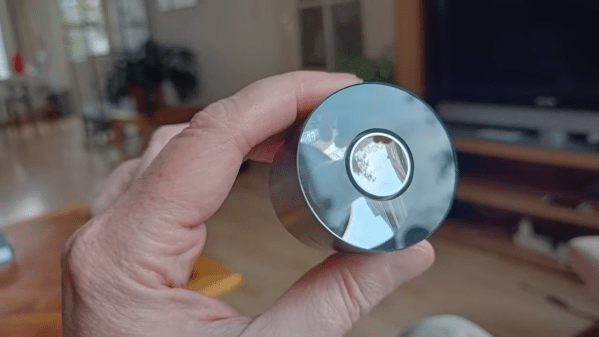 If this is the easy part of making a complete reflector telescope from a single piece of glass, we can’t wait to get a load of the hard part!

A little backstory may be in order for those who don’t follow [Jeroen Vleggaar]’s Huygens Optics channel on YouTube. A few months ago, he released a video discussing monolithic telescopes, where all the reflective and refractive surfaces are ground into a single thick block of glass. Fellow optical engineer [Rik ter Horst] had built a few tiny monolithic Schmidt-Cassegrain reflectors for use in cube sats, so [Jeroen] decided to build a scaled-up version himself.

The build starts with a 45 mm thick block of crown glass, from which a 50 mm cylinder is bored with a diamond hole saw. The faces of the blank are then ground into complex curves to reflect incoming light, first off the parabolic rear surface and then onto the hyperbolic secondary mirror ground into the center of the front face. A final passage through a refracting surface in the center of the rear face completes the photons’ journey through the block of glass, squeezing a 275 mm focal length into a compact package.

All this, of course, vastly understates the work required to pull it off. Between the calculations needed to figure out the surface shapes in the first place to the steps taken to machine a famously unforgiving material like glass, every step is fraught with peril. And because the design is monolithic, any mistakes mean starting all over again. Check out the video below and marvel at the skills needed to get results like this.

What strikes us most about [Jeroen]’s videos is the mix of high-tech and age-old methods and materials used in making optics, which we’ve seen him put to use to make everything from tiny Tesla valves to variable-surface mirrors.

END_OF_DOCUMENT_TOKEN_TO_BE_REPLACED 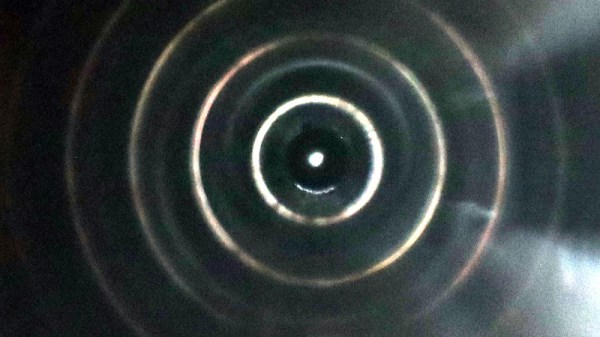 There should be a line of jokes that start “A physicist and an engineer walk into a bar…”. In my case I’m an engineer and my housemate is a physicist, so random conversations sometimes take interesting turns. Take the other day for example, as one does when talking she picked up a piece of aluminium extrusion that was sitting on our coffee table and turned it over in her hands. It has a hole down its centre and it’s natural to peer down it, at which point her attention was caught by the appearance of a series of concentric rings of light. Our conversation turned to the mechanism which might be causing this, and along the way took us into cameras, waveguides, and optical fibres.

The light reaching us after traveling along a straight narrow tube should at a cursory glance be traveling in a straight line, and indeed when I point the extrusion out of my window and look down it I can see a small segment of the tree in the distance I’ve pointed it at. It didn’t take us long to conclude that the concentric rings were successive reflections of the light coming into the end hole from off-centre angles.

In effect, the extrusion is a pinhole camera in which the image is projected onto the inside of a cylinder stretching away from the pinhole rather than onto a flat piece of film, and we were seeing the successive reflections of the resulting distorted image as they bounced to and fro down the tube towards us. It’s likely the imperfect mirror formed by the aluminium wall allowed us to see each image, as light was being diffused in our direction. Adding a piece of tape with a small pinhole at the end accentuated this effect, with the circles becoming much more sharply defined as the projected image became less blurry. END_OF_DOCUMENT_TOKEN_TO_BE_REPLACED