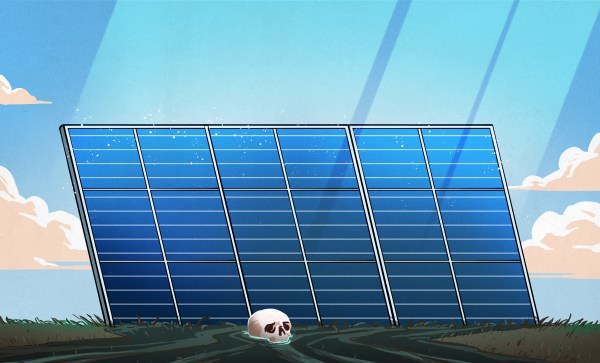 Everybody loves solar power, right? It’s nice, clean, renewable energy that’s available pretty much everywhere the sun shines. If only the panels weren’t so expensive. Even better, solar is now the cheapest form of electricity for companies to build, according to the International Energy Agency. But solar isn’t all apples and sunshine — there’s a dark side you might not know about. Manufacturing solar panels is a dirty process from start to finish. Mining quartz for silicon causes the lung disease silicosis, and the production of solar cells uses a lot of energy, water, and toxic chemicals.

The other issue is that solar cells have a guanteed life expectancy of about 25 years, with average efficiency losses of 0.5% per year. If replacement begins after 25 years, time is running out for all the panels that were installed during the early 2000s boom. The International Renewable Energy Agency (IREA) projects that by 2050, we’ll be looking at 78 million metric tons of bulky e-waste. The IREA also believe that we’ll be generating six million metric tons of new solar e-waste every year by then, too. Unfortunately, there are hardly any measures in place to recycle solar panels, at least in the US.

How are solar panels made, anyway? And why is it so hard to recycle them? Let’s shed some light on the subject.