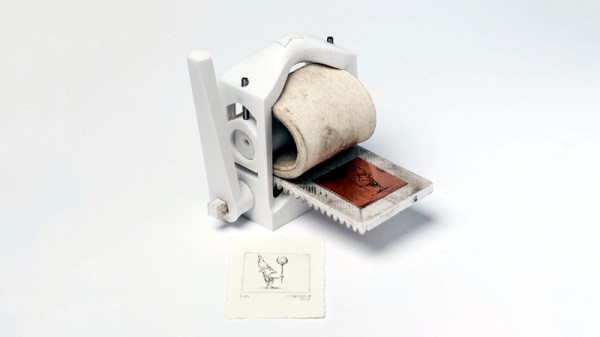 If you move among artists, you may have encountered a few printmakers. They create a drawing by cutting through a wax layer that has been deposited on a sheet of copper, then etching the plate and removing the wax. Ink is then rolled onto the plate and cleaned from the flat surface, remaining in the cracks created by the etching. A print is made by putting inked plate and a sheet of paper through a roller press at significant pressure, squeezing the ink from the cracks onto the paper. The result is a beautiful print, but the press required to do the job is by no means cheap.

[Martin Schneider] has addressed this expense with his Open Press project, by producing a printmaking press that can be 3D-printed for a fraction of the outlay of a traditional press. It’s by no means a large model, but appears no less functional for it.

The form of the press is straightforward enough, with a print bed that is drawn between a pair of rollers by a rack-and-pinion gear, and as you would imagine the construction is quite substantial. It’s all CC licensed, and you can make one for yourself if you would like, by downloading the files from Thingiverse.

It’s fair to say that printmaking hasn’t appeared much here, but we can see this press could have significant use beyond artistic applications. Meanwhile it’s a great example of 3D printing providing the means to reduce the barrier to entry for something that was previously quite an expensive pursuit.