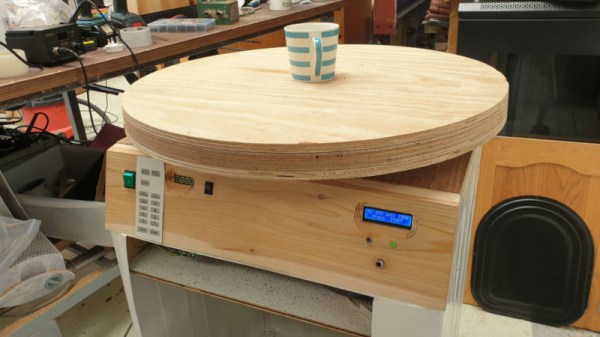 A good majority of power tools in the average workshop are all about speed. Drills, grinders, and  sanders all whizz along at thousands of revolutions per minute. Sometimes though, you need to do things slowly. For that, [bongodrummer]’s big rotary machine build might be just up your alley.

The core of the build is an old washing machine, which supplies both the machine frame and its powerful universal motor. While this can be hooked directly to a power source and allowed to spin away, it’s far more useful with some speed control in place. For this, an Arduino is hooked up to a triac circuit with feedback, allowing the speed to be set just so for whatever operation you have in mind. A set of speed-reducing pulleys helps further for getting down into the double-digit RPM while maintaining smooth rotation. There’s even a timer for extended operation, with parts salvaged from an old microwave.

The machine is built with a large rotating platter on top. By placing a clean white screen on top, the platter is great for taking 360 degree photos of objects automatically. This could be of great use in a photogrammetry setup. Alternatively, by fitting a bowl and plough assembly, the machine can be used to mull green sand for casting purposes.

It’s a versatile build that could be used for anything that needs rotation in the vicinity of 50 rpm. You could even play vinyl records on it if you were so inclined. Of course, if you’ve built a record player out of an old washing machine, we’d certainly like to know about it.