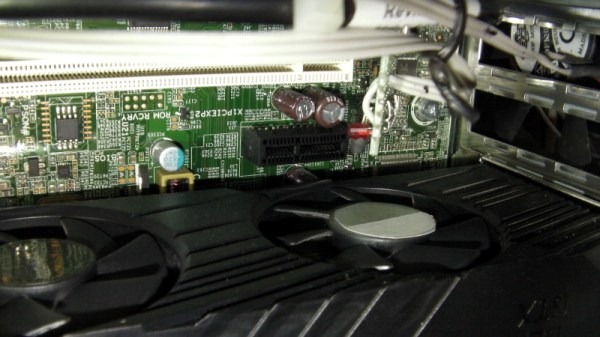 Adding an additional fan to your PC is usually pretty straightforward, but as [Randy Elwin] found, this isn’t always the case with the newer Small Form Factor (SFF) machines. Not only was the standard 80 mm fan too large to fit inside of the case, but there wasn’t even a spot to plug it in. So he had to come up with his own way to power it up and control its speed.

Now if he only needed power, that wouldn’t have been a problem. You could certainly tap into one of the wires coming from the PSU and get 12 V to spin the fan. But that would mean it was running at max speed the whole time; fine in a pinch, but not exactly ideal for a daily driver.

To get speed control, [Randy] put together a little circuit using an ATtiny85, an IR LED, and a LTR-306 phototransistor. The optical components are used to detect the GPU fan’s current speed, which itself is controlled based on system temperature. Using the GPU fan RPM as an input, a lookup table on the microcontroller sets an appropriate speed for the 80 mm case fan.

One could argue that it would have been easier to connect a temperature sensor to the ATtiny85, but by synchronizing the case fan to the computer-controlled GPU fan, [Randy] is able to manually control them both from software if necessary. Rather than waiting on the case temperature to rise, he can peg the GPU fan and have the external fan speed up to match when the system is under heavy load.

You may think this is overkill for a simple case fan, but compared to some of the cooling hacks we’ve seen in the past, it’s pretty tame. [Rui] recently put the finishing touches on his homemade CNC mill, which utilizes a dremel-like rotary tool. The problem with using rotary tools for this kind of application is you don’t really have an accurate speed readout… so he designed his own RPM gauge.

The sensor is in itself very simple. He’s using a TLE4935L hall effect sensor, a spare 16FE88 microcontroller, a Nokia LCD, and one tiny neodymium magnet. The magnet has been carefully epoxied onto the motor fan, with the hall effect sensor close by. He’s also built a guard around it, just in case the magnet decides to fly off at high speeds.

During testing he hooked up the hall effect sensor to both his home-made circuit, and an oscilloscope to confirm his findings. Once he was assured everything was working properly he sealed it off and mounted the LCD above the spindle as a nice digital readout.