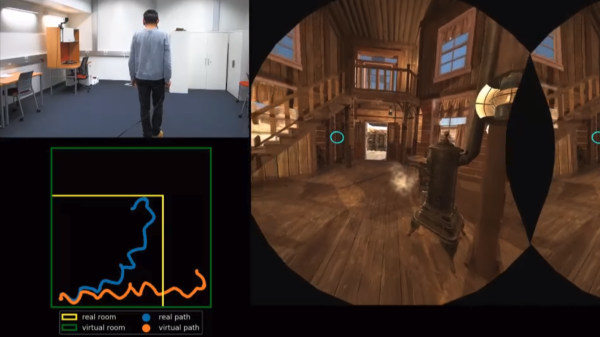 [Anjul Patney] and [Qi Sun] demonstrated a fascinating new technique at NVIDIA’s GPU Technology Conference (GTC) for tricking a human into thinking a VR space is larger than it actually is. The way it works is this: when a person walks around in VR, they invariably make turns. During these turns, it’s possible to fool the person into thinking they have pivoted more or less than they have actually physically turned. With a way to manipulate perception of turns comes a way for software to gently manipulate a person’s perception of how large a virtual space is. Unlike other methods that rely on visual distortions, this method is undetectable by the viewer.

The software essentially exploits a quirk of how our eyes work. When a human’s eyes move around to look at different things, the eyeballs don’t physically glide smoothly from point to point. The eyes make frequent but unpredictable darting movements called saccades. There are a number of deeply interesting things about saccades, but the important one here is the fact that our eyes essentially go offline during saccadic movement. Our vision is perceived as a smooth and unbroken stream, but that’s a result of the brain stitching visual information into a cohesive whole, and filling in blanks without us being aware of it.

Part one of [Anjul] and [Qi]’s method is to manipulate perception of a virtual area relative to actual physical area by making a person’s pivots not a 1:1 match. In VR, it may appear one has turned more or less than one has in the real world, and in this way the software can guide the physical motion while making it appear in VR as though nothing is amiss. But by itself, this isn’t enough. To make the mismatches imperceptible, the system watches the eye for saccades and times its adjustments to occur only while they are underway. The brain ignores what happens during saccadic movement, stitches together the rest, and there you have it: a method to gently steer a human being in a way that a virtual space is larger than the physical area available.

Embedded below is a video demonstration and overview, which mentions other methods of manipulating perception of space in VR and how it avoids the pitfalls of other methods.