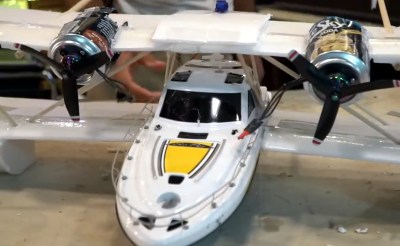 END_OF_DOCUMENT_TOKEN_TO_BE_REPLACED

A few years ago, the EasyStar RC plane took the remote control community by storm, launching dozens of clone ready to fly planes that found their way onto many fields, rooftops, and trees. [hammydude] wanted to take his EasyStar with him while also playing around with his jetski, so he did the reasonable thing: he waterproofed his remote control plane.

The EasyStar is made of foam, but that doesn’t mean it’s ready to land on a lake. To prevent any damage to the electronics, servos, and pushrods, [hammy] slightly modified the fuselage of his plane and potted the electronics in silicone glue. Now this excellent RC plane is capable of landing on calm water with a slow self-destruction.

[hammy] has flown his EasyStar seaplane in salt water, but that is a terrible environment for the exposed brushless motor. Before packing it in for the day, [hammy] pours a bit of fresh water over the motor and throttles up for a minute or two. This seems to be good enough for the bearings in the motor; in the video after the break, you can see [hammy] submerge his plane in the water and take it for a short test flight. There’s some great in-flight shots taken from the EasyStar – surely an awesome way to enjoy a trip to the shore.