For the last few weeks, RC pilot extraordinaire [Peter Sripol] has been working on his biggest project to date. It’s effectively a manned RC plane, now legally a Part 103 ultralight. Now all that work is finally bearing fruit. [Peter] is flying this plane on some short hops down a grass runway. He’s flying it, and proving that you can build a plane in a basement, in under two months, constructed almost entirely out of insulation foam.

[Peter] has been documenting this build on his YouTube channel, and although the materials for this plane are mostly sourced from either Home Depot or Lowes, the construction is remarkably similar to what you would expect to find in other homebuilt aircraft. This thing has plywood gussets, the foam is wearing a thin layer of fiberglass, and the fasteners are from Aircraft Spruce. 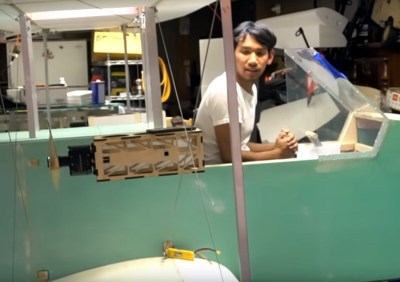 The power system is another matter entirely. The engines (all two of them!) are electric and are designed for very large RC aircraft. These engines suck down power from a massive battery pack in the nose, and the twin throttles are really just linear potentiometers hacked onto servo testers. There’s a surprising amount of very important equipment on this plane that is just what [Peter] had sitting around the workshop.

As far as the legality of this ultralight experiment is concerned, [Peter] is pretty much above-board. This is a Part 103 ultralight, and legally any moron can jump in an ultralight and fly. There are some highly entertaining YouTube videos attesting this fact. However, in one of [Peter]’s livestreams, he flew well after sunset without any strobes on the plane. We’re going to call this a variant of go-fever, technically illegal, and something that could merit a call from the FAA. We’re going to give him a pass on this, though.

This build still isn’t done, though. The pitot tube is held onto the windshield with duct tape. The plane was slightly nose heavy, but shifting the batteries around helped with that. [Peter] is running the motors on 12S batteries, and the prop/motor combo should be run on 14S batteries — $1200 of batteries are on order. The entire plane needs a paint job, but there’s no indication that will ever be done. With all that said, this is a functional manned aircraft built in a basement in less than two months.

With the plane complete and ground tests quickly moving on to flight tests, it’s only fitting to mention [Peter]’s GoFundMe page for a parachute. [Peter] is going to fly this thing anyway, and this is a great way to deflect Internet concern trolls. [Peter]’s just short of the $2600 needed for a parachute, but if the funds received go over that amount by a few hundred, a ballistic parachute will save [Peter] and the plane.