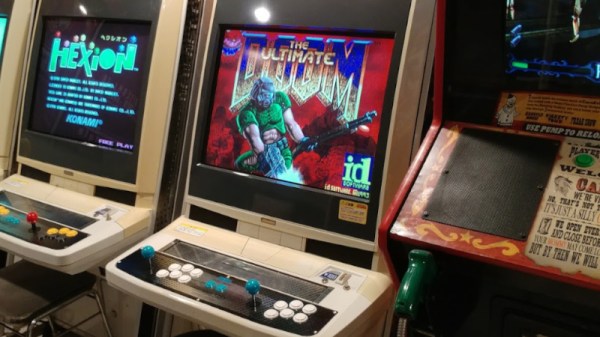 Porting DOOM to new hardware and software platforms is a fun pastime for many in the hacker scene. [DragonMinded] noticed that nobody had ported the game to the Sega Naomi arcade hardware, and set about doing so herself.

The port builds on work by [Kristoffer Andersen] who built a framebuffer port of DOOM previously. It’s available pre-compiled, complete with the shareware WAD for those eager to load it up on their own Naomi arcade cabinets.

Unlike some limited ports that only give the appearance of a functional version of DOOM, this port is remarkably complete. Loading, saving, and options menus are all present and accounted for, as well as directional sound and even WAD auto-discovery. With that said, there’s only 32 KB of space for save games on the Naomi hardware, so keep that in mind if you find yourself playing regularly.

We love a good DOOM port, whether it’s on an arcade machine, an old forgotten Apple OS, or even a UFI module.