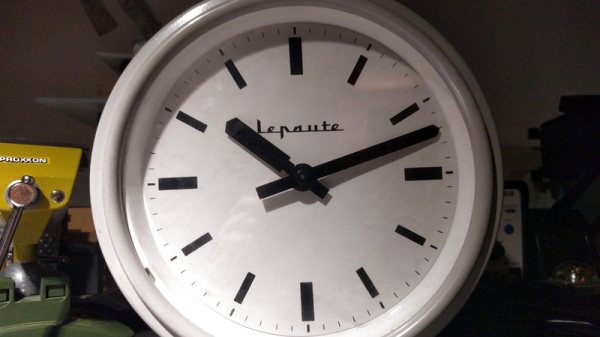 Few things are as infuriating as clocks that are not synchronized. It’s frustrating when the clock on the range and the clock on the microwave act like they’re in time zones that are one minute apart. Now picture that same issue over dozens of clocks in a train station, or hundreds in a school or factory. It’s no wonder that slave clocks, which advance on signals from a master clock, were developed.

When a pair of vintage Lepaute slave clocks made their way to [melka], he knew just what to do – build his own master clock to keep the slave on track. This particularly stylish slave clock uses pulses of alternating polarity every 30 seconds and will work on 1.5-volt pulses, which let [melka] meet his design goal of running for a year off a single AA battery. To keep the power needs low, [melka] relies on the RTC to wake up the MSP430 every second to increment a counter. When it hits 30, a pulse is sent to the clock’s motor through an H-bridge; the MCU alternates the polarity of every other pulse to advance the clock.

It’s not immediately clear how the clock is set; we recall the slave clocks in high school rapidly advancing for Daylight Saving adjustments, so we assume [melka] has provided some way of pulsing the clock quickly to set the time. Regardless, it’s a good lesson in low-power design. And be sure to check out this PIC-based master clock replacement, too.

In these days of cheap microprocessors and easy access to accurate timing through NTP or from the likes of MSF, WWVB, or DCF77, it’s no problem to ensure that any number of clocks keep the same time. In a simpler age though they didn’t have these tools at their disposal, so when a large organisation wished to ensure that all its parts ran on the same time they used an electromechanical solution. A master clock of as high a quality as the clockmakers of the day could build was fitted with a microswitch. The switch would send pulses to slave clocks which had a solenoid where a traditional clock has a pendulum. Thus every clock in the system lost or gained time at the same rate.

[Edo Lelic] has a rather nice Iskra slave clock, but unfortunately not the master that once drove it. Undeterred by this setback, he’s created an electronic driver board that generates the required 100mS pulses. His weapon of choice was a PIC microcontroller and an H-bridge driver to deliver their required voltage and polarity. The clock was designed to accept 100V pulses, but since it has an internal series resistor he determined that the solenoid was happy with a mere 24V. Source code is available, downloadable at the bottom of the linked article.

These clocks are an unseen piece of technology that is disappearing without our noticing. If you find one – or even better if you find a master clock – you’ll find it to be a very high quality timepiece indeed. A master clock would be well worth snapping up. At least now you won’t have to look too far for a driver for it.

We haven’t seen too many projects like this here at Hackaday. Save for a rather nice digital master clock build, it’s uncharted territory. Almost justification for a Retrotechtacular piece, perhaps.

Thanks [Muris Pučić] for the tip.