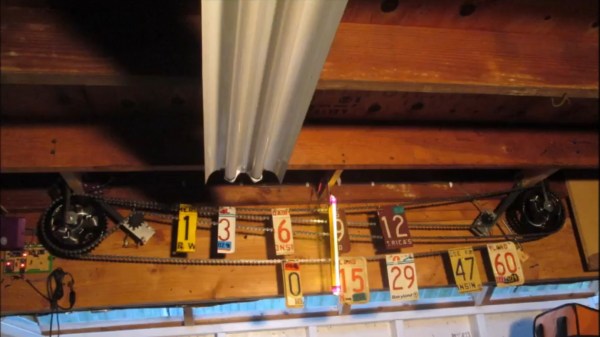 Have you ever observed the project of another hacker and thought to yourself “I have got to have one of those!”? If so, you’re in good company with hacker [garberPark], the maker of the unusual chain clock seen in the video below the break.

While on a stroll past the Chicago Avenue Fire Arts Center in Minneapolis, MN, [garberPark] was transfixed by the clock seen to the right here. In the clock, two motors each drive a chain that has numbers attached to it, and the number at the top displays the current time. It wasn’t long before [garberPark] observed his own lack of such a clock. So they did what any hacker will do: they made their own version!

Using an ESP8266, and Arduino, and some other basic electronics, they put together a horizontal interpretation of the clock they saw. Rather than being continuous rotation, limit switches keep things in line while the ESP8266’s NTP keep things in time. Salvaged scanner stepper motors provide locomotion, and what appear to be bicycle cranks and chains work in harmony with cutoff license plates to display the current time- but only if there’s somebody around to observe it; A very nice touch and great attention to detail!

If you enjoyed this, you’ll love the Sprocket and Chain clock we featured a few months back.

END_OF_DOCUMENT_TOKEN_TO_BE_REPLACED 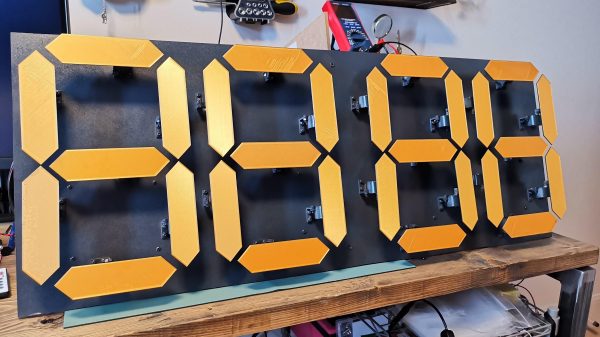 Large mechanical seven-segment displays have a certain presence that you just don’t get in electronic screens. Part of this comes from the rather satisfying click-click-clack sound they make at every transition. Unfortunately, such a noise quickly becomes annoying in your living room; [David McDaid] therefore designed a silent electromechanical seven-segment clock that has all the presence of a mechanical display without the accompanying sound.

As [David] describes in a very comprehensive blog post, the key to this silent operation is to use stepper motors instead of servos, and to drive them using a TMC2208 stepper motor driver. This chip has a unique method of regulating the current that does not introduce mechanical vibrations inside the motor. A drawback compared to servos is the number of control wires required: with four wires going to each motor, cable management becomes a bit of an issue when you try to assemble four seven-segment displays.

END_OF_DOCUMENT_TOKEN_TO_BE_REPLACED

In these days of cheap microprocessors and easy access to accurate timing through NTP or from the likes of MSF, WWVB, or DCF77, it’s no problem to ensure that any number of clocks keep the same time. In a simpler age though they didn’t have these tools at their disposal, so when a large organisation wished to ensure that all its parts ran on the same time they used an electromechanical solution. A master clock of as high a quality as the clockmakers of the day could build was fitted with a microswitch. The switch would send pulses to slave clocks which had a solenoid where a traditional clock has a pendulum. Thus every clock in the system lost or gained time at the same rate.

[Edo Lelic] has a rather nice Iskra slave clock, but unfortunately not the master that once drove it. Undeterred by this setback, he’s created an electronic driver board that generates the required 100mS pulses. His weapon of choice was a PIC microcontroller and an H-bridge driver to deliver their required voltage and polarity. The clock was designed to accept 100V pulses, but since it has an internal series resistor he determined that the solenoid was happy with a mere 24V. Source code is available, downloadable at the bottom of the linked article.

These clocks are an unseen piece of technology that is disappearing without our noticing. If you find one – or even better if you find a master clock – you’ll find it to be a very high quality timepiece indeed. A master clock would be well worth snapping up. At least now you won’t have to look too far for a driver for it.

We haven’t seen too many projects like this here at Hackaday. Save for a rather nice digital master clock build, it’s uncharted territory. Almost justification for a Retrotechtacular piece, perhaps.

Thanks [Muris Pučić] for the tip.