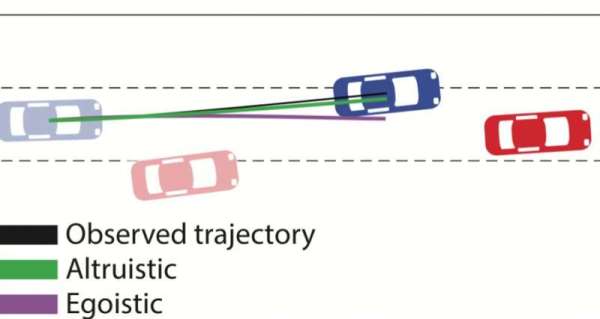 In a recent study by a team of researchers at MIT, self driving cars are being programmed to identify the social personalities of other drivers in an effort to predict their future actions and drive safer on roads.

It’s already been made evident that autonomous vehicles lack social awareness. Drivers around a car are regarded as obstacles rather than human beings, which can hinder the automata’s ability to identify motivations and intentions, potential signifiers to future actions. Because of this, self-driving cars often cause bottlenecks at four-way stops and other intersections, perhaps explaining why the majority of traffic accidents involve them getting rear-ended by impatient drivers.

The research taps into social value orientation, a concept from social psychology that classifies a person from selfish (“egoistic”) to altruistic and cooperative (“prosocial”). The system uses this classification to create real-time driving trajectories for other cars based on a small snippet of their motion. For instance, cars that merge more often are deemed as more competitive than other cars.

When testing the algorithms on tasks involving merging lanes and making unprotected left turns, the behavioral predictions were shown to improve by a factor of 25%. In a left-turn simulation, the automata was able to wait until the approaching car had a more prosocial driver.

Even outside of self-driving cars, the research could help human drivers predict the actions of other drivers around them.