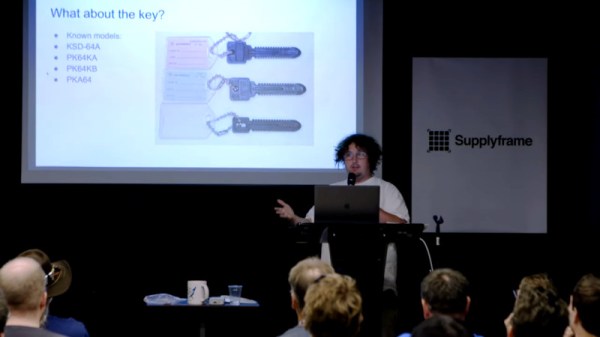 When you’re a nation state, secure communications are key to protecting your sovereignty and keeping your best laid plans under wraps. For the USA, this requirement led to the development of a series of secure telephony networks over the years. John McMaster found himself interested in investigating the workings of the STU-III secure telephone, and set out to replicate the secure keys used with this system.

[John] had a particular affinity for the STU-III for its method of encrypting phone calls. A physical device known as a Crypto Ignition Key had to be inserted into the telephone, and turned with a satisfying clunk to enable encryption. This physical key contains digital encryption keys that, in combination with those in the telephone, are used to encrypt the call. The tactile interface gives very clear feedback to the user about securing the communication channel. Wishing to learn more, John began to research the system further and attempted to source some hardware to tinker with.

As John explains in his Hackaday Superconference talk embeded below, he was able to source a civilian-model STU-III handset but the keys proved difficult to find. As carriers of encryption keys, it’s likely that most were destroyed as per security protocol when reaching their expiry date. However, after laying his hands on a broken key, he was able to create a CAD model and produce a mechanically compatible prototype that would fit in the slot and turn correctly.