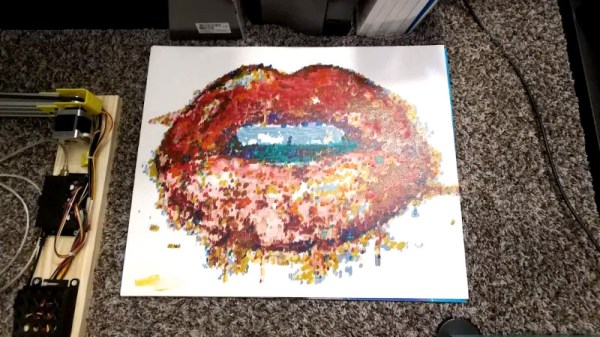 Digital imagery is great, but there’s a certain charm to a real, handpainted piece. However, we live in an age of CNC, and the robots are always willing to try something new if they’re properly instructed how to do it. In this vein, [Alexander Leiser] developed PaintBot to paint beautiful pictures for him.

The ‘bot uses aluminium extrusion and stepper motors to move around. A 3D printed bracket was printed to hold a paintbrush so the artbot can do its work. [Alexander] wrote a script in C# to parse images and generate the requisite G-code for the ‘bot. Over time, this expanded into a full application, with a GUI and provision for automatic color changing. There’s plenty of logic required, to cover things like cleaning the brush between colors and composing the image properly. The medium of choice is acrylic on canvas, after early experiments with paper were found to be unsatisfactory.

The output from PaintBot is impressive, with a certain digital quality to the way the individual paint strokes make up the final image. [Alexander] has also wrapped up the software and named it PaintCam. Distributed on Thingiverse, it allows anyone with a 3D printer to use it as a robot painter themselves.

The project shows that it’s possible to create a nice artwork using CNC hardware, and we’d love to see what this could do with a neural network back end doing some artistic interpretation. If you build such a system, be sure to let us know! Video after the break.

END_OF_DOCUMENT_TOKEN_TO_BE_REPLACED 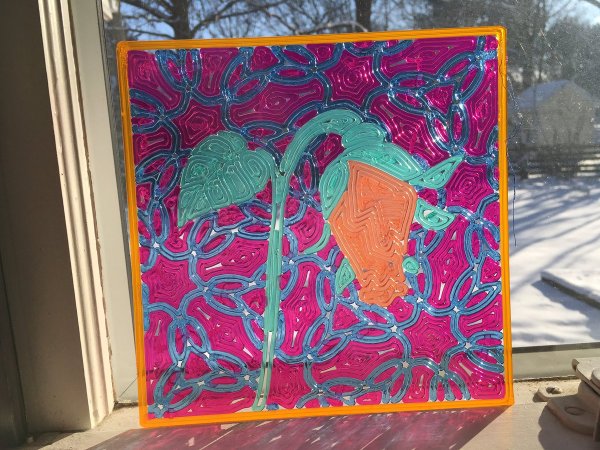 In the 3D-printing community, [Mark Peeters] may be known-and-loved for his drooloop printing, but that’s not enough to stop him from pushing the spectrum of printing tricks even further. Dubbed Toolpath Painting, [Mark] is taking that glorious sheen from the bottom layer of a 3D print and putting it to work to make eye-catching deliberate visual displays.

[Mark’s] work comes in two flavors. The first capitalizes on a fairly wide 2mm nozzle and translucent filaments to create vibrant sun catchers. The second relies on the reflective patterns of an opaque filament where the angle of the extrusion lines determine the type of sheen. [Mark’s] progress is beautifully captured on his twitter feed where he rolls out variations of this style.

Photographs simply don’t do justice to this technique, but you need not be left unsatisfied. Mark has left us with a thorough introduction to creating these patterns on your own printer in the video after the break.

Eager to put that printer to work on other avant-garde styles? Have a look at some other inspirational techniques from a prior MRRF, or have a go at texturing your prints with some velocity painting.