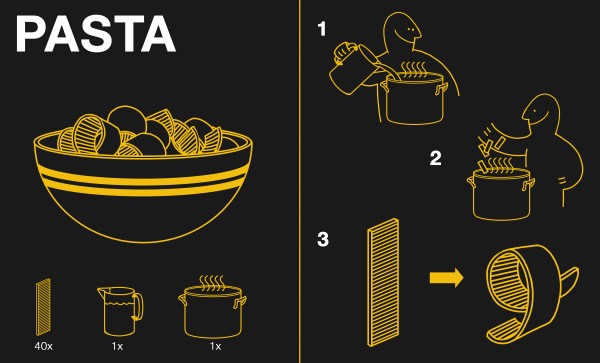 When it comes to food packaging, there’s no bigger scam than potato chip bags, right? People complain about the air (nitrogen, actually) inside, but it’s there for a reason — nitrogen pushes out oxygen, so the chips live in a state of factory-fresh dormancy until you rip open the bag and release the gas. If you want flat-pack chips, there’s always those uniformly-shaped potato slurry wafers that come in a can. But even those usually manage to have a few broken ones.

On the other hand, no one complains about the extra space in their box of fusilli — that would be silly. But seriously, successfully shipping fragile foods requires either flat packing or a lot of extra space, especially if that food comes in a myriad of fun 3D shapes like pasta does. Everybody knows that 3D pasta is superior to flat pasta because it holds sauces so much better. The pasta must be kept intact!

The great thing about pasta as a food is that it’s simple to make, and it’s more nutritious than potato chips. Because of these factors, pasta is often served in extreme situations to large groups of people, like soldiers and the involuntarily displaced. But storing large quantities of shapely pasta takes up quite a bit of space. And because of all that necessary air, much of the packaging goes to waste.

So what if you could keep your plethora of pasta in, say, a filing cabinet? A research team led by the Morphing Matter Lab at Carnegie Mellon University have created a way to make flat-pack pasta that springs to life after a few minutes in boiling water.