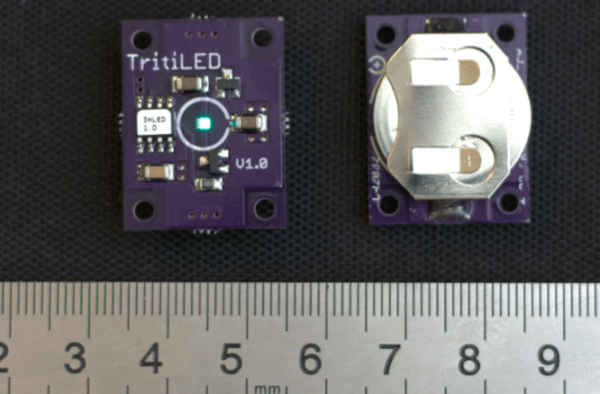 Tritium, or 3H is an isotope of hydrogen which has been used as everything from radiolabel in analytical chemistry to a booster to kickstart the chain reaction of nuclear weapons. Lately tritium’s most common use has been in key chains and jewelry. A small amount of tritium is stored in a phosphor coated glass tube. The beta decay of the tritium causes the phosphor to glow. The entire device is called a Gaseous Tritium Light Source (GTLS).

In the USA, GTLS devices are only allowed to be used in specific cases such as watches, compasses, and gun sights (MURICA!). Key chains and jewelry are considered frivolous uses and are prohibited by the nuclear regulatory commission. Of course, you can still order them from overseas websites.

The safety of GLTS devices have been hotly debated on the internet for years. They’re generally safe, unless you break the glass. That said, we’re happy getting our radiation exposure through cool hacks, rather than carrying a low-level source around in our pockets.

Enter [Ted Yapo], an amateur astronomer. After tripping over his telescope tripod one time too many, he decided to take matters into his own hands. He’s designing TritiLED, a dim LED light source which can last for years. [Ted] is using a  Luxeon Z LED, driven with PWM by a PIC 12F508 8 bit microcontroller. Running at 26.3 μA, he estimates about a year of run time on a CR2032 watch battery, or a whopping 15 years on a pair of lithium AA cells. Sure he could have done it with a 555 timer, but using a micro means more features are just a few lines of code away. [Ted] took advantage of this by adding a high brightness mode, blink modes, and an exponential decay mode, which emulates the decay of GLTSs.

Best of all it’s all open source. [Ted] is publishing under the (CC-BY-SA) license on Hackaday.io.

Here’s a hypothesis for you: radioactive decay varies over time, possibly with a yearly cycle. [Panteltje] decided to test this hypothesis, and so far has two year’s worth of data to comb over.

Radioactive decay can be easily detected with a photomultiplier tube, but these tubes are sensitive to magnetic fields and cosmic rays that would easily fly through just about any shielding [Pantelje] could come up with. Instead, the radiation in this setup is detected with simple photo detectors, pressed right up against a tritium-filled glass ampoule, a somewhat common lighting solution for fishing lures, watch faces, and compasses.

The experimental setup records the photo detectors, a temperature sensor, and a voltage reference, recording all the data to an EEPROM once an hour. All the important electronics are stuffed into a heatsinked, insulated, light-proof box, while the control electronics reside on a larger board with battery backup, alarm, indicator LEDs, and an RS232 connection.

After one year, [Pantelje] recorded the data and reset the experiment for another year. There are now two years worth of data available, ready for anyone to analyze. Of course, evidence that radioactive decay changes over the course of a few years would turn just about every scientific discipline on its head, so at the very least [Panteltje] has a great record of the output of tritium lights against the expected half-life.