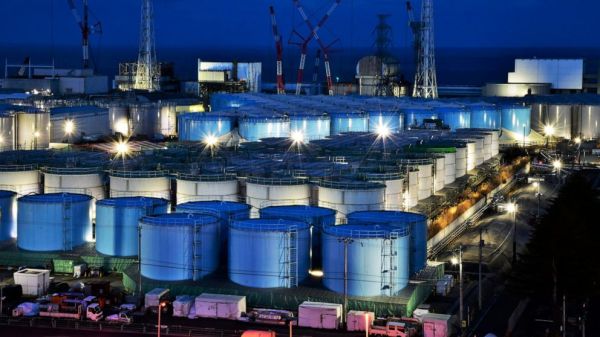 Despite being present in everything that contains water, tritium is not an isotope that many people were that familiar with outside of select (geeky) channels, such as DEF CON with a tritium-containing badge, the always excellent NurdRage’s assembly of a tritium-based atomic battery, or the creation of a tritium-phosphor-based glow-in-the-dark tesseract cube.

Tritium is a hydrogen isotope that shares a lot of characteristics with its two siblings: 1H (protium) and 2H (deuterium), with the main distinction being that tritium (3H) is not a stable isotope, with a half-life of ~12.32 years that sees it decay into 3He. Most naturally occurring tritium on Earth originates from interactions between fast neutrons (>4.0 MeV) from cosmic radiation and atmospheric nitrogen.

Recently tritium has become a politically hot topic on account of the announced release of treated water at the Japanese Fukushima Daiichi nuclear plant. This has raised for many the question of just how much tritium is ‘too much’ and what we’re likely to notice from this treated — but still tritium-containing water — being released into the ocean.

END_OF_DOCUMENT_TOKEN_TO_BE_REPLACED 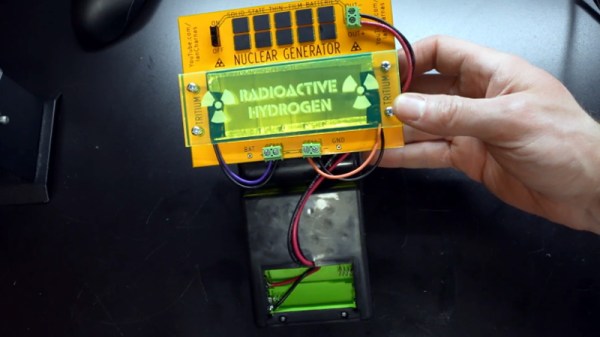 The idea of a tritium power cell is pretty straightforward: stick enough of the tiny glowing tubes to a photovoltaic panel and your DIY “nuclear battery” will generate energy for the next decade or so. Only problem is that the power produced, measured in a few microwatts, isn’t enough to do much with. But as [Ian Charnas] demonstrates in his latest video, you can eke some real-world use out of such a cell by storing up its power over a long enough period.

As with previous projects we’ve seen, [Ian] builds his cell by sandwiching an array of keychain-sized tritium tubes between two solar panels. Isolated from any outside light, power produced by the panels is the result of the weak green glow given off by the tube’s phosphorus coating as it gets bombarded with electrons. The panels are then used to charge a bank of thin-film solid state batteries, which are notable for their exceptionally low self-discharge rate. 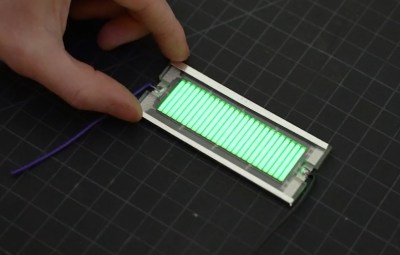 Some quick math told [Ian] that a week of charging should build up enough of a charge to power a knock-off handheld Tetris game for about 10 minutes. Unfortunately, after waiting the prescribed amount of time, he got only a few seconds of runtime out of his hacked together power source.

His best guess is that he got a bad batch of thin-film batteries, but since he could no longer find the exact part number he used originally, he had to design a whole new PCB for the second attempt. After waiting two long months to switch the game on this time, he was able to play for nearly an hour before his homebrew nuclear energy source was depleted.

We wouldn’t consider this terribly practical from a gaming standpoint, but like the solar harvesting handheld game we covered last year, it’s an interesting demonstration of how even a minuscule amount of power can be put to work for intermittent applications. Here it’s a short bout of wonky Tetris, but the concept could just as easily be applied to an off-grid sensor.

END_OF_DOCUMENT_TOKEN_TO_BE_REPLACED 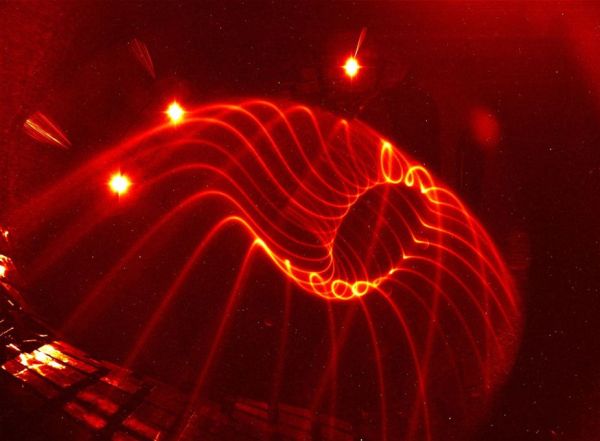 It’s hardly a secret that nuclear fusion has had a rough time when it comes to its image in the media: the miracle power source that is always ‘just ten years away’.  Even if no self-respecting physicist would ever make such a statement, the arrival of commercial nuclear fusion power cannot come quickly enough for many. With the promise of virtually endless, clean energy with no waste, it does truly sound like something from a science-fiction story.

Meanwhile, in the world of non-fiction, generations of scientists have dedicated their careers to understanding better how plasma in a reactor behaves, how to contain it and what types of fuels would work best for a fusion reactor, especially one that has to run continuously, with a net positive energy output. In this regard, 2020 is an exciting year, with the German Wendelstein 7-X stellarator reaching its final configuration, and the Chinese HL-2M tokamak about to fire up.

Join me after the break as I look into what a century of progress in fusion research has brought us and where it will take us next.

END_OF_DOCUMENT_TOKEN_TO_BE_REPLACED 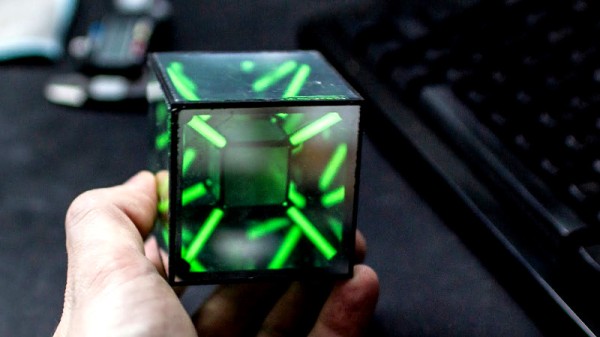 As the cube is to three dimensions, the tesseract is to four. Mortals in this universe find it difficult to contemplate four-dimensional geometry, but there are methods of making projections of such heretical shapes in our own limited world. [Sean Hodgins] was interested in the geometry, and decided to build a tesseract featuring everyone’s favourite isotope of hydrogen, tritium.

The build starts with a 3D printed inner and outer frame, sourced in this case from Shapeways in nylon. Both frames have holes which are designed as a friction fit for off-the-shelf tritium vials. These vials use the radioactive decay of tritium with a phosphor coating to create a dim glow which lasts approximately a decade. With the inner frame held inside the outer with the vials acting as structural supports, the inner and outer surfaces are then fitted with semi-transparent mirrored acrylic, creating a nice infinity effect.

It’s a fun trinket that would be perfect as a MacGuffin in any sci-fi film with a weak plot. [Sean] notes that while the tritium glow is disappointingly dim, the device does make a good nightlight. If you’ve built one and get bored with the hypercube, you can always repurpose your tritium vials into a nuclear battery. Video after the break.

END_OF_DOCUMENT_TOKEN_TO_BE_REPLACED

[lasersaber] has a passion: low-power motors. In a bid to challenge himself and inspired by betavoltaic cells, he has 3D printed and built a small nuclear powered motor!

This photovoltaic battery uses fragile glass vials of tritium extracted from keychains and a small section of a solar panel to absorb the light, generating power. After experimenting with numerous designs, [lasersaber] went with a 3D printed pyramid that houses six coils and three magnets, encapsulated in a glass cloche and accompanied by a suitably ominous green glow.

Can you guess how much power and current are coursing through this thing? Guess again. Lower. Lower.

END_OF_DOCUMENT_TOKEN_TO_BE_REPLACED

In the 1950s, a nuclear-powered future seemed a certainty. The public had not been made aware of the dangers posed by radioactive material, any large-scale accidents involving nuclear reactors had either been hushed up or were yet to happen, and industry and governments were anxious to provide good PR to further their aims. Our parents and grandparents were thus promised a future involving free energy from nuclear reactors in all sorts of everyday situations.

With the benefit of hindsight, we of course know how the story turned out. Windscale, Three Mile Island, Chernobyl, and Fukushima, and we’re still waiting for our atomic automobiles.

If you have a hankering for nuclear-powered domestic appliances though, all is not lost. [GH] is leading the charge towards a future of atomic energy, with a nuclear-powered calculator. It’s not quite what was promised in the ’50s, but it is nevertheless a genuine appliance for the Atomic Age. At its heart is not a 1950s-style fission reactor though, but a tritium tube. Beta particles from the tritium’s decay excite a phosphor coating on the tube’s inside wall, producing a small amount of light. This light is harvested with a solar cell, and the resulting electrical energy is stored in an electrolytic capacitor. The cell has an open-circuit voltage of 1.8 V, and the 100 μF capacitor in question stores a relatively tiny 162 μJ. From this source, a dollar store calculator can operate for about 30 sec, so there should be no hanging about with your mathematics.

We’ve brought you a tritium battery before, albeit a slightly larger one. And should you need the comforting glow of a tritium tube but not the radiation risk, how about this LED-based substitute?

A Betavoltaic cell is a device that uses a radioactive source of beta particles and a semiconductor p-n junction to generate electricity. Tritium, an isotope of hydrogen, is often used as the radioactive element. You may think that tritium is hard to obtain or even forbidden, however, recently you can find tritium in self-lightning key chains, and it is also used in watches and firearm night sights. The beta particles (electrons) from the tritium radioactive process causes phosphors in the device to glow, giving a light that can last for years.

[NurdRage] has just created a nuclear battery using tritium vials from key chains. After getting rid of the plastic containers, he sandwiches the vials between two small solar panels. That’s all! Instant power for the next 15 years. Of course, the amount of power you can get from this device is on the order of microwatts. The battery produces around 1.6 volts at 800 nano amps. He gets 1.23 microwatts, not much, but it is in fact more than the output of commercial units at 0.84 microwatts, for a ten percent of the cost. That minuscule amount of power is actually not easy to measure, and he does a great job explaining the circuit he used to measure the current.