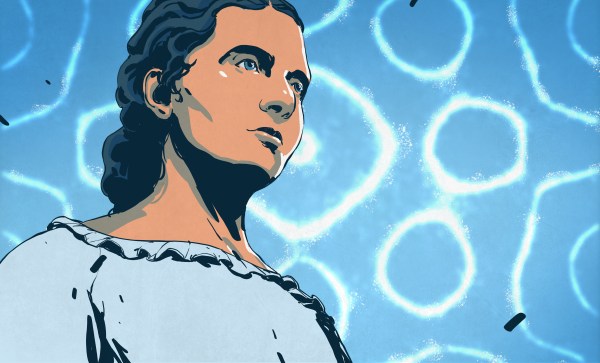 When a 13-year old Marie-Sophie Germain was stuck in the house because of the chaotic revolution on the streets of Paris in 1789, she found a refuge for her active mind: her father’s mathematics books. These inspired her to embark on pioneering a new branch of mathematics that focussed on modeling the real world: applied mathematics.

Post-revolutionary France was not an easy place for a woman to study mathematics, though. She taught herself higher maths from her father’s books, eventually persuading her parents to support her unusual career choice and getting her a tutor. After she had learned all she could, she looked at studying at the new École Polytechnique. Founded after the revolution as a military and engineering school to focus on practical science, this school did not admit women.

Anyone could ask for copies of the lecture notes, however, and students submitted their observations in writing. Germain got the notes and submitted her coursework under the pseudonym Monsieur Antoine-August Le Blanc. One of the lecturers that she impressed was Joseph Louis Lagrange, the mathematician famous for defining the mathematics of orbital motion that explained why the moon kept the same face to the earth. Lagrange arranged to meet this promising student and was surprised when Germain turned out to be a woman.

‘Le Blanc’ also corresponded with German mathematician Carl Friedrich Gauss on number theory. When Napoleon’s armies occupied the town the famous mathematician lived in, Germain enlisted a family friend in the army to check that Gauss had not been harmed. Gauss didn’t realize who had helped him out, until he discovered that ‘Le Blanc’ was Sophie Germain, he wrote to her thanking her for her concern and praising her mathematical prowess given the hurdles set before her.

“How sweet is the acquisition of a friendship so flattering and precious to my heart. The lively interest you took during this terrible war deserves the most sincere recognition….But when a person of this sex, who, for our mores and prejudices, must recognize infinitely more obstacles and difficulties than men to become acquainted with these thorny searches, knows how to get rid of these obstacles and to penetrate what they have, most hidden,  must undoubtedly, she has the most noble courage, talents quite extraordinary, genius superior.”

As well as working on the thorny and theoretical problems of number theory, Germain worked on applying mathematics to real world problems. One of these was a challenge set by the Paris Academy of Science to mathematically describe the elasticity of metal plates. An experimenter called Ernest Chladni had demonstrated that a metal plate would resonate in odd ways when vibrated at certain frequencies. If you put sand on the plate, it would collect in different patterns created by the resonance of the plate, called Chladni figures. To win the prize, the solution had to predict these figures.

The Mathematics of Stress and Strain

Mathematically predicting the behavior of metal plates could make it easier to design metal objects and predict how they would behave under stress. The prize was set in 1808 but was so difficult that Germain was the only one who decided to try to solve it, as it required coming up with a whole new way to analyze and describe how materials bend and change under stress. 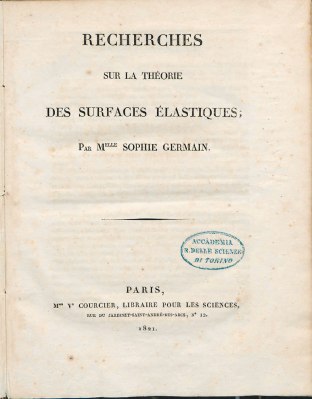 The first two solutions that she submitted were rejected due to mathematical errors, but the third version won her the prize in 1816. However, due to the Academy policy of not allowing women to join (and to only attend events if they were wives of members), Germain was not able to attend the ceremony where the prize was granted. She was also not allowed to attend meetings of the Academy. After the Academy failed to publish her prize-winning work, Germain had to pay to publish the work herself in 1821.

Later, her friend Joseph Fourier allowed her to attend meetings and presentations, but the mathematical establishment never really accepted her, or her work. In a letter to a colleague in 1826 she complained about the way they rebuffed her:

“These facts are my domain and it is to me alone that they remain hidden. That’s the privilege of the ladies: they get compliments and no real benefits.”

In the same letter, Germain complained of suffering fatigue and she was diagnosed with breast cancer shortly afterwards. She died in 1831. Her final years were spent working on a solution to Fermat’s Last Theorem, and just before her death she published a partial solution that was the basis for much research into the theorem, which was finally solved only in the late 1990s.

Although Sophie Germain never earned a degree in her lifetime, she was given an honorary degree in 1837 from the University of Göttingen at the suggestion of Gauss, who noted that

“she proved to the world that even a woman can accomplish something worthwhile in the most rigorous and abstract of the sciences and for that reason would well have deserved an honorary degree.”

The Academy that snubbed her also now offers an annual prize for mathematics in her name. Perhaps more importantly, her work formed the basis of the study of elasticity and stress in metals that allowed engineers to build larger objects and buildings. Creations such as the Eiffel tower in 1887 were directly influenced by her work, and it laid some of the groundwork for Einstein’s theory of General Relativity.

Modern scholars argue that Germain could have been more than she was: her work, they argue, was hamstrung by a limited understanding of some of the fundamental concepts that Gauss and others had described. Although her work was fundamental and important, if she had been given free access to the education that she wanted and deserved, it’s easy to imagine that she would have gone farther. 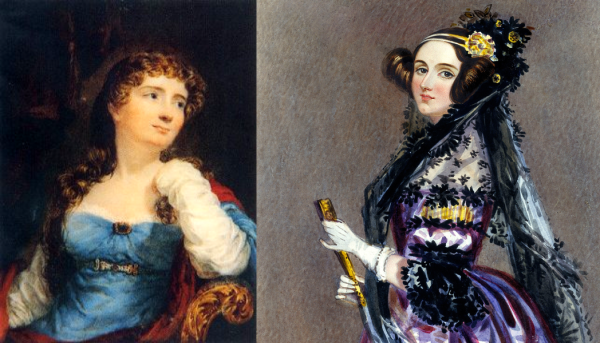