Billy Hoffman has built a site crawler that can hide its activity within normal web traffic. Crawling a website is one of the easiest ways to find exploitable pages, but the systematic nature of the crawl makes it stand out in logs. Billy set out to design a crawler that would behave like a normal web browser. It follows more popular links first (think “news”, not “legal notice”) and it doesn’t hit deep linked pages directly without first creating an appropriate Google referrer. There are tons of other tricks involved in making the crawler look “human” which you’ll find in Billy’s slides over at SPI Labs. You can also read about the talk on Wired News.

END_OF_DOCUMENT_TOKEN_TO_BE_REPLACED 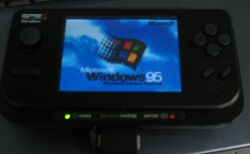 The GP2X is a portable game console that runs Linux and was released in November last year. This is a console that encourages you to hack its open platform and has a dev wiki to document those projects. Mandleman has recently gotten Bochs, the x86 emulator, running on the platform. He then booted Windows 95 (Internet Archive) on top of that; It takes six and a half minutes. He’s also built emulators for the NES, NeoGeo pocket, and Wonderswan. Recently released Linux based devices like the GP2X and the Nokia 770 are interesting because they encourage development. I hope in the future we’ll see an open device that has the market penetration of the PSP.