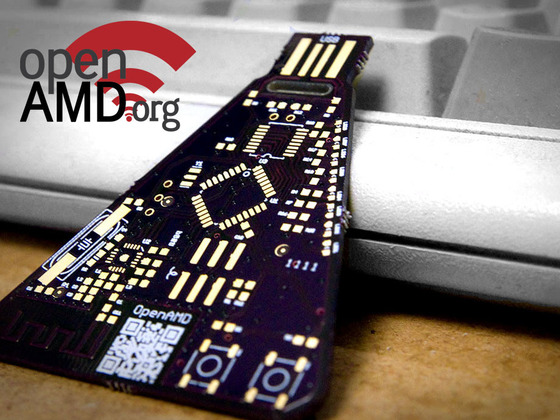 [Aestetix] writes in to tell us that the OpenAMD (Attendee Meta-Data) project is working on a new revision of their hardware, to be debuted at CCC Camp this fall.

For the uninitiated, OpenAMD combines an Active RFID tracking system with social networking, and is completely open-source. You walk into the conference, put on the OpenAMD badge, and suddenly you can see yourself as a dot moving around on a map. Or you can log into the social networking site, create a profile, and watch as your personal information is pulled into the mesh, which then tells you talks you might like, people you might like, where those people are, and more. There’s even an open API where you can create your own ‘killer’ apps, which may include games or other interesting aggregates of the attendee information.

This year’s “erlenmeyer flask” badge is the latest incarnation of the project you may have seen at 2600’s Hackers on Planet Earth conference in 2008 and 2010, or at Chaos Computer Congress (CCC) in 2006 or 2007. This time, the team is looking to deploy at this summer’s CCC Camp, and at numerous conferences in the future to be determined.

The badge itself is an Atmega AVR microcontroller connected to a Nordic nRF24L01+ and a pair of 74HC595 shift registers. The AVR is running USBaspLoader with custom OpenAMD firmware on top, which in concert with the Nordic chip implements the OpenBeacon air protocol. The shift registers drive 14 LEDs which are capable of being used as a persistence of vision display. Because of the USBaspLoader, you don’t even need an Atmega in-circuit programmer to reflash the chip: You can even use the Arduino IDE to implement your own functionality.

The badges, the ‘readers’, all the hardware and software required to create your own instance is completely open source, and you can download the specs today and tinker with them.

So what’s the catch? They need your help. They’re running a kickstarter to raise the minimum amount needed to fabricate these badges and bring them to CCC Camp, and any support you can offer will go a long way to help. Even if you’re not going to CCC Camp, they’re planning at deploying at many more conferences state-side in the future, and the badges themselves are more than enough fun to tinker with. The Nordic chip can be particularly fun.

Full disclosure? I’m designing the badge hardware this time around.