Here’s an LED marquee as the mouth of a Jack-o’-lantern which [Mike Skoczen] made. This comes hot on the heels of that playable Tetris Pumpkin. [Thanks Jacob]

This is a sideways view of the Arduino-powered costume [Dan] and his wife made for their son. It has lights, buttons, a character display, and makes noise.

Cylon Centurion from a pumpkin

Stuck inside because of the hurricane, [Shawn] and his girlfriend carved this Cylon Centurion pumpkin complete with lights and sound.

[Matthew] built this helmet which features an 8×8 RGB LED matrix as the face. He calls it the digital reaper. You can see him testing the electronics in this clip.

[Jeff] wrote in to tell us about the Halloween preparations at the Port City Makerspace in Portsmouth, New Hampshire. Here we have a Ghost Busters Proton Pack, weeping angel wings from Dr. Who, and an Arc Reactor from Ironman. [Dan] took a $13 electronic dartboard and made it work with an Android device. The idea behind it is that these cheap electronic models feature a very sparse display. At this price that doesn’t surprise us. He wanted to add the features you’d find on a coin-op model like the ones found in bars. So he added some hardware that lets him use Android as the scoreboard.

To do this all he needs is the ability to detect when a dart has hit the board and what value was registered. The board is really nothing more than a 62-button input device organized as an 8×8 matrix. He soldered jumpers between the pins and a DIP socket. After the work was done he programmed his Cordium BASIC microcontroller, a 28-pin chip, and dropped it right in. It communicates with a serial Bluetooth module which provides the connectivity with an Android phone. You can see a very quick clip of the app embedded after the break.

This would be just perfect if you’re using an Android set-top-box on a TV near the dart board.

END_OF_DOCUMENT_TOKEN_TO_BE_REPLACED 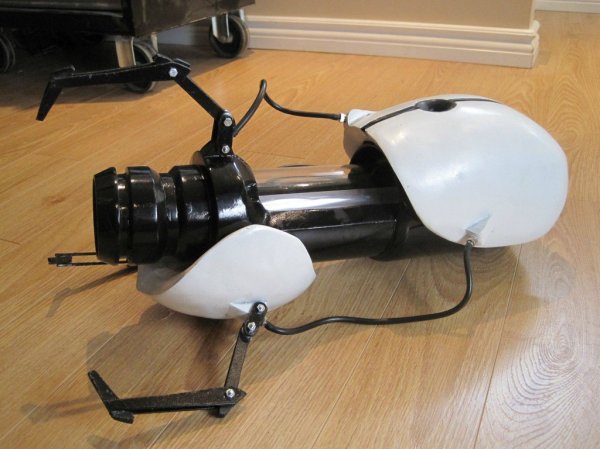 This Portal gun will really make [aNoodleJMC’s] costume pop this year. She actually built the video game weapon replica from scratch. It even includes some electronics to light it up blue or orange depending on which portal she’s planning to fire at an available flat surface.

There’s a lot of parts that went into the project, but by far our favorite one on the list is an acrylic toilet plunger. Its handle serves as a light pipe for the colored LEDs and can be seen above as a cloudy rod at the center of the clear barrel. A 4″ and 3″ PVC pipe helped to form the rest of the barrel, along with a 3″ clear acrylic pipe for the transparent areas. The bulbous parts of the body were sculpted from florist’s foam. Once she had all of the parts roughed out it’s obvious that [aNoodleJMC] spent a ton of time filling problem areas with Bondo, sanding everything smooth, and giving it a paint job she can be proud of. We hope she didn’t forget to include GLaDOS in the fun.

We actually just bought our Portal gun. But that’s because we had the big plans of adding the ability to levitate objects. END_OF_DOCUMENT_TOKEN_TO_BE_REPLACED

The folks at the London-based startup GoCardless have a pool table at their office. Being the techies they are, they decided to build a system that automatically scores games. The results, while not fully complete, are still pretty impressive for something whipped up during a 48 hour hackathon.

The automated score keeper uses a webcam duct taped to the ceiling right above the center of the pool table, The balls – red and yellow balls replace the rainbow of solids and stripes to make things easier – are found using OpenCV.

This build isn’t quite finished yet. The people at GoCardless are looking to improve the accuracy of their setup by using a camera with a higher frame rate and possibly moving on to physics simulation to predict where the balls should be. If these guys get the time, they could add something like augmented reality pool table to improve shot accuracy.