As you’re probably aware, there’s a video announcing the launch of The Hackaday Prize blocking the front page of Hackaday right now. This is by design, and surprisingly we haven’t gotten any complaints saying, ‘not a hack’ yet. I’m proud of you. Yes, all of you.

Making this video wasn’t easy. The initial plans for it were something along the lines of the new Star Wars trailer. Then we realized we could do something cooler. The idea still had Star Wars in it, but we were going for the classics, and not the prequels. As much as we love spending two hours watching a movie about trade disputes, we needed to go to Tatooine. 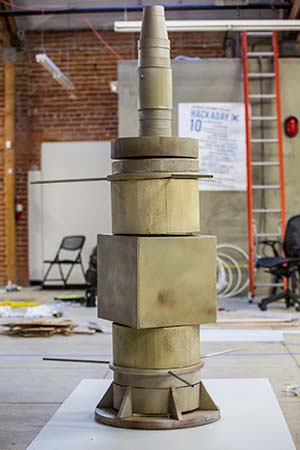 I just wanted to go to Toshi station

This meant building a prop. We decided on the moisture vaporators from Uncle Owen’s farm. It’s a simple enough structure to build at the Hackaspace in a weekend, and could be broken down relatively easily for transport to the shooting site. I’ve created a hackaday.io project for the actual build, but the basic idea is a few pieces of plywood, an iron pipe for the structural support, and some Coroplast and spray paint to make everything look like it’s been sitting underneath two suns for several decades.

Oh, I was the only person at the hackaspace that knew what greebles were. That’s not pertinent in any way, I’d just like to point that out.

The vaporator is the star of the show, but we also rented a space suit. No one expected teflon-covered beta cloth when we were calling up costume rental places, but the suit can really only be described as a space-suit shaped piece of clothing. The inlet and outlet ports are resin, and the backpack is a block of foam. If anyone knows where we can get an Orlan spacesuit, or even a NASA IVA or Air Force high altitude suit, let us know.

[Matt Berggren] led the prop build and starred in the assembly footage. [Aleksandar Braic] and [Rich Hogben] rented a ridiculous amount of camera equipment. On set for the hijinks was [Aleksandar “Bilke” Bilanovic], [Brian Benchoff] (me), [Jasmine Bracket], [Sophi Kravitz], and [Mike Szczys].

16 thoughts on “The Making Of The Hackaday Prize Video”