A passive radar is a special type of radar doesn’t require you to have a transmitter. You rely on a radio transmitter of opportunity provided by somebody else to illuminate radar targets. This can be your local radio or television station broadcasting with up to several megawatts of power. The advantages compared with a normal radar are numerous:

While most radars systems we know nowadays have a dedicated transmitter, the idea of passive radar goes way back. One of the first radar experiments could be classified as a passive radar. In 1935, Sir Robert Watson-Watt and his colleague Arnold Wilkins performed the first aircraft tracking radar experiment by detecting echoes from a Heyford bomber aircraft illuminated by a BBC shortwave wave radio transmission. The figure on the right shows the two dipole antennas and the mobile laboratory used to perform the measurement. This seminal work was the basis of the Chain Home early warning radar system that went on to save numerous lives during the Second World War.

There are a large number of non-military applications for passive radars. I’m interested in the use of passive radar for geophysical and astronomical radio remote sensing.  An example of a successful passive radar system used for geophysical remote sensing is the Manastash Ridge Passive Radar developed at the University of Washington, which was used to study ionospheric irregularities produced during geomagnetic storms. In the last 15 years the technology has become much more accessible, making it possible to perform these types of measurements with easily obtainable hardware.

The Manastash Ridge radar used FM radio for passive radar, which is probably the easiest to start with, because the bandwidths of individual stations are relatively modest. With FM radio, you can also typically observe not only ionospheric irregularities, but also meteor trails and movements of airplanes flying within a 100-600 km radius of yourself. A recent measurement that I performed during a geomagnetic storm is shown in the figure below. You can see large scale ionospheric irregularity structures that are moving across the field of view at 1000 meters per second associated with the aurora borealis north of the passive radar receiver.

The thing is, pretty much anyone can do these types of measurements themselves. That is if there was open source software to analyze the data. This would open the door for citizen scientists interested in a broad range of topics:

If there were a network of passive radars around the world, there would be a great potential for new scientific discoveries to be made.

A surprisingly small amount of hardware is needed to build a simple passive radar:

An example of a receiver antenna pair used for FM radio passive radar is shown below. Both antennas are log-periodic antennas that are broad band in nature, but also have some degree of directionality. One of the antennas is pointing towards the FM radio transmitter and used to obtain a measurement of the waveform transmitted by the radar. The other is pointing towards the opposite direction and is used to measure echoes. All of the example measurements shown in this article were performed with these antennas.

The signals from these two antennas need to be recorded in a coherent manner. This means that we need two channels with samples that are aligned. This is typically achieved by using a common clock used as a reference for the downconversion stages and the analog to digital converters. The picture below shows two possible off-the-shelf devices that can be used for passive radar. On the left is a modifed dual RTLSDR R820T dongle system I hacked together for $16! On the right is a USRP N200 software defined radio with a dual channel TVRX2 tuner daughter board. A word of warning before rushing to implement the RTLSDR approach: there are subtle tweaks that need to be done in order to make everything work, involving aligning samples and aligning the center frequencies of the two data streams. The limited dynamic range also makes it much more difficult to get good measurements out of the system as the levels need to be carefully adjusted to get enough signal into the receiver while avoiding compression or clipping of the signal. But it can be done if you have enough patience! I’ll try to share what these tweaks are in the next post.

In order to get more fidelity out of a passive radar system, it is advisable to have a preamplifier and band-pass filter between the antenna and the software defined radio to reduce out of band noise contaminating the measurements and to increase signal levels so that they are more suitable for the digital receiver.

Two alternative digital receivers that can be used for passive radar

After the strong direct path signal and clutter has been estimated, it can be subtracted from the measured signal and the signal processing to estimate the weaker echoes from airplanes or meteors can be performed. Because we know that the weaker targets that we are interested in have a significant Doppler shift and Doppler spread, we can’t make the same non-moving target assumption we did for the clutter. However, we can still make the assumption that the target has a scattering Doppler spectrum that doesn’t change over a long enough period of time to allow us to estimate the range-Doppler spectrum. This allows us to perform deconvolution on the autocorrelation function of the received echo. This is something that is called lag-profile inversion. While this sounds complicated, it really isn’t.

Once all of this is done, we can plot the results. If you see airplanes, your radar is working. While airplanes are boring radar observables, they are by far the easiest ones to see and they are there all of the time. Meteors are more transient, but also should be relatively easy to measure if you know what to look for. They appear as quick blips at near zero Doppler shifts.

There are also many different variations of FM radio passive radar that can be done. For example, by adding a third antenna to the system, one can perform angle of arrival direction finding by inspecting the phase difference (time of arrival) between two  receiver antennas spaced apart from each other. The video below shows phase difference measured using two different receiver antennas. In this video, the phase difference between the two antennas is used to select the color of the pixel (hue) and the echo strength is used to color code the brightness of the pixel. Again, lots of airplanes and specular meteor echoes can be seen.

That’s all for this post. In upcoming posts I’ll go into more detail on how passive radar works in practice. 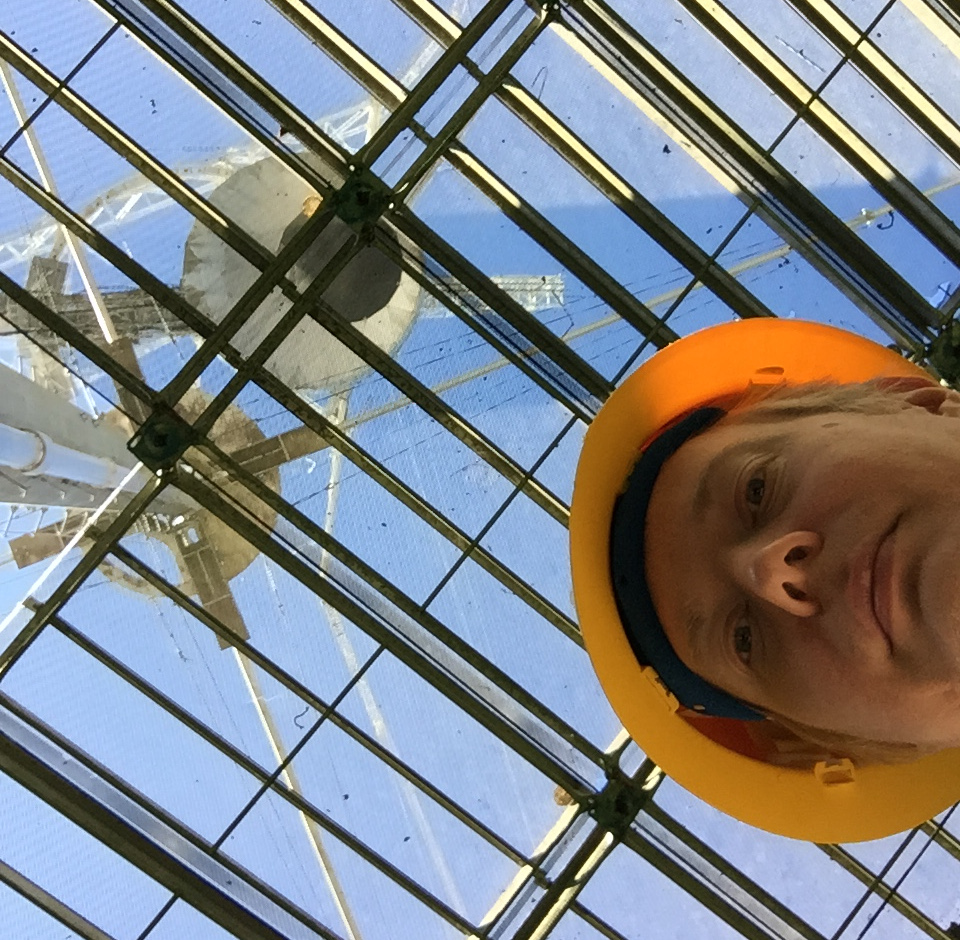 I’m a radio science geek who loves working with radars and other remote sensing techniques. I’ve programmed computers and dabbled with electronics ever since I was a kid. I really got into designing and building radio remote sensing instruments while working on my doctorate titled: “On Statistical Theory of Radar Measurements” (find a link to it on my webpage). I wasn’t happy with just writing measurement equations, I wanted to try things out in practice. Currently I work at the MIT Haystack Observatory, where I explore a number of exciting topics, including, but not limited to: high power large aperture radar measurements of the ionosphere, meteors, and planetary objects; passive radar, milliwatt class spread spectrum HF radar, megawatt class ionospheric heating, ionospheric remote sensing with global navigation satellites, and radio astronomy. I’ve published two open source projects that turn your software defined radar into a radio remote sensing instrument: the GNU Chirp Sounder, which allows you to listen to over the horizon radars and chirp ionosondes all around the world; and the GNU Ionospheric Tomography Receiver (Jitter), which allows you the determine the line integral of ionospheric electron density by listening to 150/400 MHz coherent beacons on satellites.