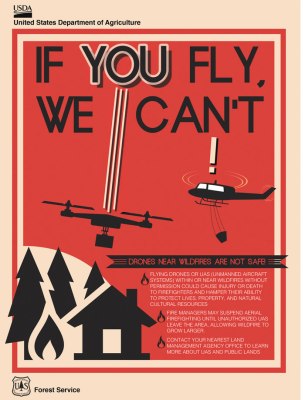 There is no denying that personal drones are in the public eye these days. Unfortunately they tend to receive more negative press than positive. This past weekend, there were news reports of a wildfire in California. Efforts to fight the fire were hampered when no less than five drones were spotted flying in the area. Some reports even stated that two of the drones followed the firefighting aircraft as they returned to local airports. This is the fourth time this month firefighting planes have been grounded due to unmanned aircraft in the area. It’s not a new problem either, I’ve subscribed to a google alert on the word “Drone” for over a year now, and it is rare for a week to go by without a hobby drone flying somewhere they shouldn’t.

The waters are muddied by the fact that mass media loves a good drone story. Any pilotless vehicle is now a drone, much to the chagrin of radio control enthusiasts who were flying before the Wright brothers. In this case there were two fields relatively close to the action – Victor Valley R/C Park, about 10 miles away, and the Cajun Pass slope flying field, which overlooks the section of I-15 that burned. There are claims on the various R/C forums and subreddits that it may have been members from either of those groups who were mistaken as drones in the flight path. Realistically though, Victor Valley is too far away. Furthermore, anyone at the Cajun pass flying site would have been fearing for their own safety. Access requires a drive through 3 miles of dirt road just to reach the site. Not a place you’d want to be trapped by a wildfire for sure. Who or whatever was flying that day is apparently lying low for the moment – but the problem persists.

In the USA, the FAA rules are (finally) relatively clear for recreational drone operations. The layman version can be found on the knowbeforeyoufly.org website, which was put together by the Academy of Model Aeronautics (AMA), The Association for Unmanned Vehicle Systems International (AUVSI), and other groups in partnership with the FAA.

The problem comes down to common sense on the part of the drone pilot. I know that Hackaday readers are some of the smart ones. The problem tends to be the person who bought a high-end drone from a photo or electronics store, and is either oblivious to the danger their new craft can pose, or is more interested in getting footage they can sell to the media. That’s right, we’re living in the age of the Paparazzi Drone. These sorts of people simply didn’t exist a few years back, as one needed many hours of practice just to get in the air. With today’s GPS enabled systems, anyone can be flying right out of the box. 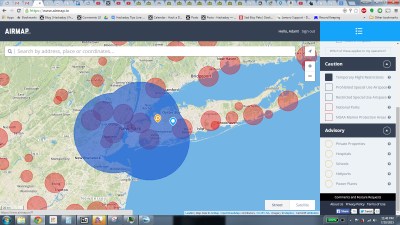 How do we solve the problem? Information and self policing are the first weapons at our disposal. If you see someone doing something dangerous, let them know, and offer advice. Who knows, you might end up with a new flying buddy.

On the information front, several websites, such as Don’t Fly Drones Here, No Fly Drones (UK) and others have sprung up to show the current exclusion zones. Personally, The best resource I’ve found of for checking local restrictions in the USA is Airmap.io. While Airmap requires a login to access the site, the features are worth the annoyance. Local airports and their exclusion zones are shown, with a phone number for the tower. Temporary restrictions issued via Notice To Airmen (NOTAM) can also be shown. For instance, while researching this article, Airmap showed an exclusion zone in my area for a VIP visit in New York City. One click took me directly to the NOTAM with all the information I needed. Add one of these sites to your checklist before going out flying.

What else can be done to combat the problem of drones in the wrong place? Sound off with your own ideas down in the comments.