What if there was a job where you built, serviced, and prepared science demonstrations? This means showing off everything from principles of physics, to electronic theory, to chemistry and biology. Would you grab onto that job with both hands and never let go? That was my reaction when I met [Dan Rosenberg] who is a Science Lecture Demonstrator at Harvard University. He gave me a tour of the Science Center, as well as a behind the scenes look at some of the apparatus he works with and has built. 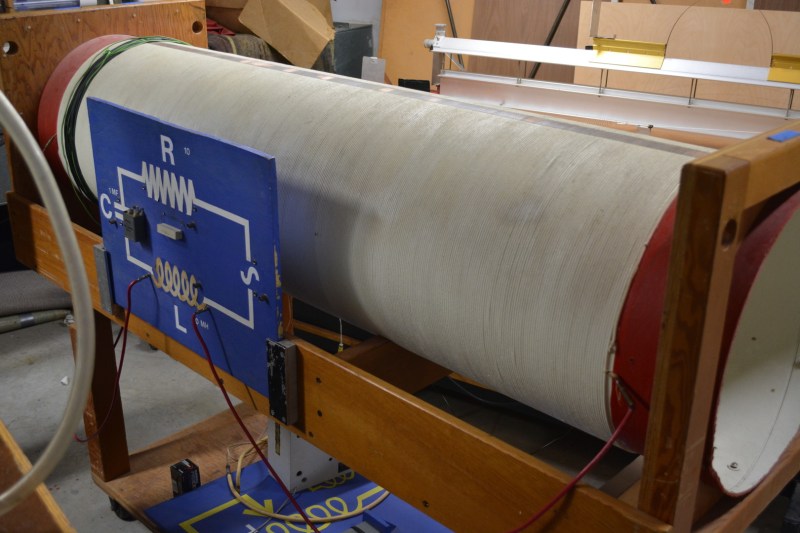 Here is a great example of what a physical demo for electronic principles is all about. When it comes time to explain inductors, [Dan] rolls this baby out for the professors and makes sure it’s ready to go in time for class. The giant pipe is wrapped with wire and connects to the schematic board on the front of the rack.

Illuminates this light bulb on a stick

Of course it’s not just electronics that are covered in Harvard’s Science Center. Here is a microwave demonstration that uses this large black horn to generate the waves. The small incandescent light bulb is held in some plastic tubing on the end of a stick. Insert it into the path of the radio waves and it lights up. We wonder if your hand will feel hot if you don’t keep it out of the line of fire? 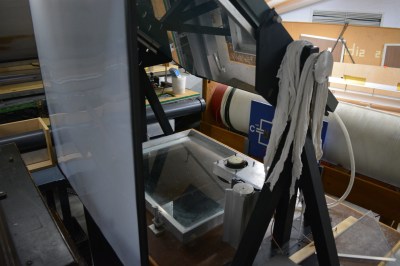 Speaking of waves, stored right next to the inductor demonstration is a wave table that projects the patterns onto a screen. This is a really clever setup that predates the proliferation of document cameras in classrooms.

You can make out a plate of glass laying flat. Just to the right and above is an audio speaker mount to face down at the plate of glass. To use the apparatus you pool water on top of the glass, and connect the speaker to a signal generator. Light shines up from below the glass, and reflects the wave patterns in the water on mirror which is mounted at a 45-degree angle to project the image onto the back of the white screen. I remember seeing these wave demonstrations on a reel-to-reel film in High School physics class. I think the apparatus easily doubles the cool-factor in this demo compared to a pre-recorded video.

For standing waves and wavelengths there is a long, clear oil-filled tube. A speaker at one end produces the waves which, when tuned to the correct wavelength produce a very visible standing wave. There are fluorescent tubes built-in to make the oil easily visible.

Dan posed next to the really big meter for scale. Again you can easily get a headless meter and project its output on a screen but you have to admit that this just feels more awesome. I think the same about demonstrating fire tornadoes and locking a freshman in a Faraday cage as the electricity storm (demo) rages around them.

Can I say I studied at Harvard?

This was really just the tip of the iceberg. The storage rooms are lined with cabinets full of demos, and every bit of floorspace is occupied by larger builds or collections like this pile of circuit illustration boards.

Because this was an impromptu tour I was only able to take pictures of the areas for which [Dan] is responsible. But we did get to walk through the chemistry and biology staging areas. In addition to these physical exhibits, the Demonstration Services are responsible for preparing chemicals for those demos and cleaning up afterward. There was even a 7-foot tall double-helix of a bit of human DNA that was about 2-feet in diameter. [Dan] assembled this from a kit with thousands of parts. He used the Tom Sawyer method of doing the tedious work in the lunch area — attracting students like flies who were eager to help.

Art made of old motor commutators

If you want to build great stuff you need a shop and tools. [Dan] and a couple of his colleagues have a small bit of office space, but hop through one door and enter this sizable workshop. There are a ton of awesome machine tools; somehow I only snapped a picture of one-half of the shop, there is another area behind me with the rest of the gear.

As with any hacker, [Dan] likes to keep a well-populated junk bin. Shelves around this area are decorated with art made from the leavings. I really enjoyed the sculptures made of old motor commutators. It’s also hard to miss the stacks of hard drive magnets adorning many of the metal surfaces. There are hundreds of them and [Dan’s] sure he will find a really cool use for them some day.

First Programmable Computer in the US

The Harvard Mark I

Diagram of the computer

This tape has the program on it

A big bonus on this trip is the huge computer installed in the building’s lobby. This is the Harvard Mark I, the first programmable computer built in the United States. The machine takes a program on the input tape, along with the positions of a huge settings register, and automatically calculates an output. It was used during the Manhattan Project to calculate implosion models used when developing Trinity, the first atomic bomb.

This Chain is a Lie and Demonstration Services Videos 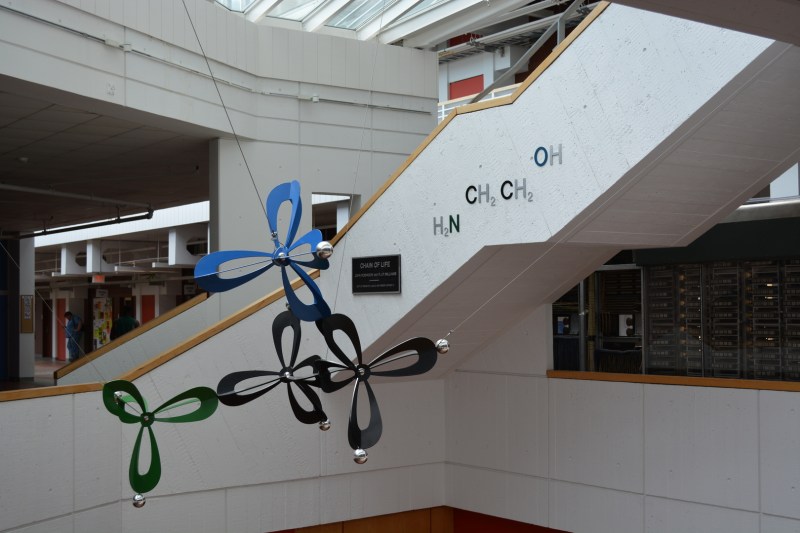 It’s always fun to throw a bit of a riddle into the tour. In the same part of the lobby as the Mark I (seen here from behind) there is a sculpture of a molecule, along with its makeup labeled on the stairway behind it. [Dan] tells me “the chain is a lie” but my chemistry chops are lacking so I couldn’t work it out myself. Can you spot the problem? If so, leave your explanation in the comments below.

If you find these Science Lecture Demonstrations as fascinating as I do, you’ll want to grind through their YouTube channel. I picked out two of my favorites below. The first features [Dan] showing the paramagnatism of Oxygen. The second is a blast from my childhood; a fission demonstration using mousetraps and ping pong balls that I first remember seeing at a very young age on the Mr. Wizard’s World television program.

Now if that isn’t even enough for you, all of the demos are cataloged on the Demonstration Services webpage.