APRS Cave-Link uses the amateur radio’s Automatic Packet Reporting System (APRS) inside caves to get their position data (and other messages) out.

Imagine that you’re coordinating a large scale search-and-rescue mission in a cave. You need to know where all your groups are, and whether or not they’ve found anything. But how do they all communicate to the command center?

You’d guess radio, but you’d guess wrong. Radio doesn’t propagate well at all in a maze of twisty passages, all alike; rocks absorb radio waves, especially in the VHF/UHF range that’s best suited for most small radios. In the past, you’d run wire and transmit along it. This article runs through the options in detail. But adding miles of wire to your already heavy caving and climbing gear is a nuisance or worse.

Some experiments by groups of amateur radio operators, and cavers, with APRS repeaters aim to change that. Digipeaters, as they’re known in the APRS world, take an incoming message and forward it on again. On each successive hop, the station that received the signal appends its name to a list of paths that are sent along with the message, which assures that the message propagates but doesn’t get repeated around forever in a loop.

Digipeaters and battery packs are dropped, in Hänsel and Gretel fashion, as the cavers work their way through the cave. The trick is to make sure to place one repeater before you’ve entirely lost the radio signal from the previous one, of course. But the APRS Cave-Link project got one mile’s worth of transmission in Mammoth Cave without using wires at all. That’s not bad! 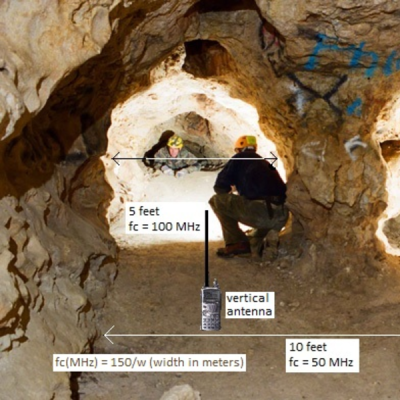 Now, GPS still doesn’t work underground, so the cavers need to bring an accurate map along with them and keep track of their own location. But even getting important messages (“we found him!”) passed around inside a cave environment is enough of a challenge.

We’ve seen APRS used for tracking high-altitude balloon payloads, and we can’t help but wonder if the same attention to weight-saving that’s demonstrated in these DIY versions wouldn’t also be useful in a caving context.

Have you made any cool networks of APRS links? Under adverse conditions? Let us know in the comments.

And thanks [Travis Goodspeed] for the unintentional tip.