A Japanese protester flew a quadcopter with a symbolic amount of soil from the contaminated Fukushima region onto the roof of the Prime Minister’s office in April. Although it was a gesture, it alerted the Tokyo police department to the potential need to be able to pull drones out of the air. 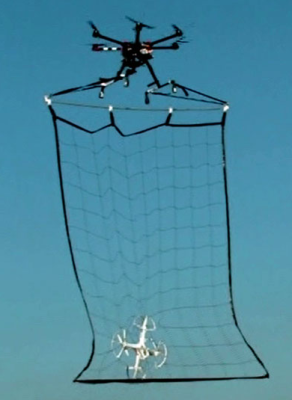 Simply shooting them down won’t do — think of the innocent bystanders on the ground subjected to a rain of quadcopter parts. The Tokyo police’s solution: catch them in a net, flown by another quadcopter, of course.

We can’t embed it here, but go click through to the video. It looks like the police are having a really good time. How long before we see drone-net sets under the Christmas tree, or quadcopter-tag leagues? We’re uncertain of how far the Battlebots in the Sky movement got.

We have no shortage of yahoos driving quadcopters in the States, of course. From interfering with fire-fighting aircraft to simply flying too close to commercial airplanes, people are doing things that they simply shouldn’t. We’ve been covering the US government’s response that finally culminated in the FAA making rules requiring medium-weight drones to be registered. Watch our front page for more on that next week. Fly safe, folks.