[Neil Movva] is not your average college student. Rather than studying for exams or preparing to defend a dissertation, he’s working on a project that will directly help the disabled. The project is Pathfinder, a wearable haptic navigation system for the blind. Pathfinder is an ambitious project, making it all the way to the semifinals of the 2015 Hackaday Prize. Haptics, the technology of providing feedback to a user through touch, lies at the core of Pathfinder. [Neil] was kind enough to present this talk about it at the Hackaday SuperConference. 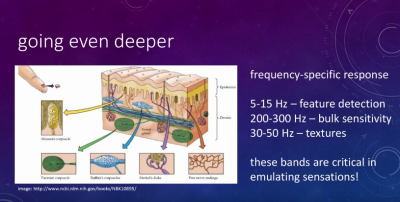 Much of the study with haptics involves trying to work with the systems the body has in place. Touch actually is sensed as a series of vibrations in different bands. 5-15 Hz for feature detection, 30-50 Hz for textures, and 200-300 Hz for bulk sensitivity. Mixing and matching vibrations within these bands can simulate anything from smooth marble to brushed metal to sandpaper. That’s right, vibrations can trick your brain into feeling textures!

The technology has been slow to evolve though. Apple made a splash early in 2015 with their force touch haptic feedback system. Force touch essentially is four coils of wire on a metal bar – something a hacker could come up with in their workshop. That’s exactly what [Neil] would like to see – hackers getting their hands into haptics, and pushing the technology forward.