There is a fascinating brain reaction known as the McCollough Effect which is like side-loading malicious code through your eyeballs. Although this looks and smells like an optical illusion, the science would argue otherwise. What Celeste McCollough observed in 1965 can be described as a contingent aftereffect although we refer to this as “The McCollough Effect” due to McCollough being the first to recognize this phenomena. It’s something that can’t be unseen… sometimes affecting your vision for months!

McCollough’s article Color Adaptation of Edge-Detectors in the Human Visual System was written while she was part of the department of Psychology at Oberlin College in Ohio. She went on to many different color research programs — most recently at the University of Dayton Research Institute in Dayton, Ohio. In the 1990’s she changed her name to Dr. Celeste McCollough Howard but I will omit Howard in the rest of the article to keep the period specific references easy to follow. She has now been retired since 2003.

The effect laid out in her paper involves patterns of horizontal and vertical bars. First a subject stares at black and white patterns. Then alternating patterns of horizontal red and black bars and a set of vertical green and black bars (called adaptation). This causes a bit in your brain to be set. The result of this is the ability to detect these patterns and indicate the detection of one of the adapted patterns by seeing its complimentary color. Where there is only black and white the brain now sees black and light green, or black and pink.

This image shows the sets of horizontal and vertical bars, the center column labeled “adapt” contains the two variations of the bars with complimentary colors (red and green) which is how you would set the bit as I described above. Once this process has gone on for a few minutes (2 to 4 minutes seems to be the average time required) you can then look at the set of images on the left for the magic to happen. The resulting effect is simulated by the color overlay in the far right column labeled “post-adapt”.

At first this seems like your run of the mill visual aftereffect or optical illusion, which is fair enough since we have been participating in these fun optical illusions from a young age. The differences between the ordinary optical illusions and The McCollough Effect are more than meets the eye.

As a child I remember conducting optical experiments in elementary classrooms, although it wasn’t until many years later that I referred to them in that way. At the time, they were simply “Cool tricks that Mrs. Badcrumble showed me!” and I’m almost certain we didn’t get into the analysis of that data beyond the explanation of complimentary colors. The most memorable version of this was a color afterimage of the American flag.

If you take a black surface like a dinner table and place a white circle, perhaps a saucer on that surface and stare at the saucer for several minutes you can probably guess what you will see when you look up at the white wall. That’s right, a giraffe doing pull-ups. Wait, that’s different thing. The white wall should should have a black circle, this is commonly referred to as a color afterimage. The same effect can be done with a variety of colored shapes on light or dark backgrounds. There is a similar principle behind the American flag example I mentioned before. Stare at the center of this mis-colored flag for 30 seconds, then stare at the white area next to it. You should see the appropriate red, white, and blue coloration.

The above experiment is an example of color afterimage. The colors we see in the white space after staring at the flag are a result of the rods and cones in our retinas becoming fatigued from prolonged exposure to the same color. This lasts from a few seconds to a minute as the eye recovers rather quickly in the absence of constant exposure.

The concept of a contingent aftereffect is a little more complicated than the color afterimage. Although the name for the concept is fairly straight forward:

There is quite a bit of evidence that suggests the McCollough Effect (ME) takes place in the brain and is not merely a result of fatigued rods and cones in the retina. There has been quite a bit of work to determine where the ME takes place in the brain, some of which is listed below and can be found on the ME scholarpedia page of which Dr. McCollough is the curator.

The McCollough Effect is thought to involve the monocular pathways at an early stage of the visual cortex. This is based on multiple theories which include evidence provided by other published works. One of the more interesting of these is that the ME can be generated with images that alternate at frequencies up to 50Hz, which is too fast to consciously perceive the color and orientation relationships. The ability to generate the ME at this frequency are consistent with properties of the early cortical areas, which include the primary visual cortex (V1).

The ME can last for much longer than color afterimage when exposed to the adaptation images for the same length of time. The ME has lasted 3.5 months in extreme cases, however a modest exposure to the ME adaptation images of only a few minutes can have a lasting ME of 24 hours or more. 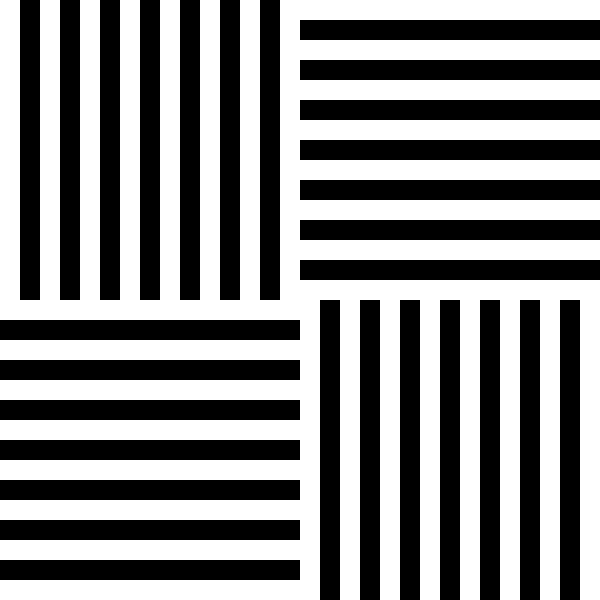 The lasting ME has some interesting properties in regard to orientation. Not only does the ME represent horizontal lines as one color and vertical as another, the ME has limitations to the angle at which lines are acknowledged as vertical or horizontal. If you were to adapt yourself to the ME (again, I’m not suggesting that you do this… but if you did, this might happen) and then look at the image to the right you would see red in the top left and bottom right quadrants and green in the top right and bottom left. This is the result we expected based on what we have learned about the ME thus far.

However if you were to rotate the image (or your head depending on your hardware setup) you would notice that when the lines rotate to 45º the color overlays are no longer seen. If you keep rotating the image (or head) to 90º you will see the color overlays return, however they are now representative of the line’s current orientation which is not the same color as they were before we started rotating things.

This topic includes a chasm of intellectual publications from academia and private researchers alike. If you want to read a bit about how brain chemistry, brain electricity, primary sensory processes, associative learning, classical conditioning, and sensory adaptation are a part of perceptual plasticity, download this article from Boston University (PDF) to get your beak wet.

The McCollough Effect has interesting properties that are still not well understood. I certainly don’t have a deep enough understanding of the concept to pose some deep final thought sort of questions. What does come to my mind is machine vision. Perhaps knowing more about how our brains interpret phenomenon like ME can help improve color recognition, edge-detection, and orientation in machine vision. What do you think? Let us know in the comments below.

81 thoughts on “Hack Your Brain: The McCollough Effect”