Troy New York’s Tech Valley Center of Gravity is following up their January IoT Hackathon with another installment. The April 16-17 event promises to be a doozy, and anyone close to the area with even a passing interest in gaming and AR/VR should really make an effort to be there.

Not content to just be a caffeine-fueled creative burst, TVCoG is raising the bar in a couple ways. First, they’re teaming up with some corporate sponsors with a strong presence in the VR and AR fields. 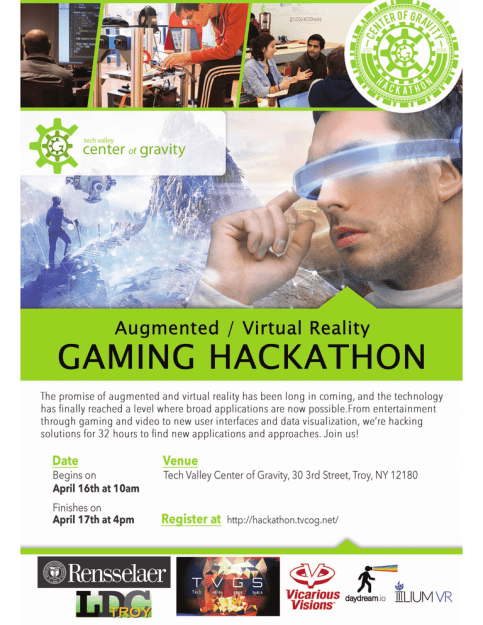 Daydream.io, a new company based in the same building as the CoG, is contributing a bunch of its Daydream.VR smartphone headsets to hackathon attendees, as well as mentors to get your project up and running. Other sponsors include 1st Playable Productions and Vicarious Visions, game studios both located in the Troy area. And to draw in the hardcore game programmers, a concurrent Ludum Dare game jam will be run by the Tech Valley Game Space, with interaction and collaboration between the AR/VR hackers and the programmers encouraged. Teams will compete for $1000 in prizes and other giveaways.

This sounds like it’s going to be an amazing chance to hack, to collaborate, and to make connections in the growing AR/VR field. And did we mention the food? There was a ton of it last time, so much they were begging us to take it home on Sunday night. Go, hack, create, mingle, and eat. TVCoG knows how to hackathon, and you won’t be disappointed.

Thanks to [Duncan Crary] for the heads up on this.

One thought on “Get Your Game On: Troy’s TVCoG Hosts VR And Gaming Hackathon”