Only about 10% of blind people around the world can read Braille. One primary reason is the high cost of Braille displays. The cost is a result of their complexity and reliability – required to ensure that they are able to handle wear and tear.

[Vijay] has been working since 3 years on a Refreshable Braille Display but has only recently been able to make some substantial progress after teaming up with [Paul D’souza]. During his initial experiments, he used dot matrix printer heads, but the current version uses tiny vibration motors as used in mobile phones. He’s converting rotary motion of the tiny motors in to linear movement for pushing the Braille “cell” pins up and down. The eccentric weight on the vibration motor is replaced with a shaped cam. Continuous rotation of the cam is limited by a stopper, which is part of the 3D printed housing that holds the motors. Another 3D printed part has three cam followers, levers, springs and Braille pins rolled in one piece, to create half a Braille cell. Depending on the cam position, the pins are either pushed up or down. One Braille cell module consists of two cam follower pieces, a housing for six vibration motors, and a cover plate. Multiple modules are chained together to form the display.

The next step would be to work on the electronics – in particular ensuring that he is able to control the motor movement in both directions in a controlled manner. Chime in with your comments if you have any ideas. The 3D design files are available from his Dropbox folder.

The other complementary project he is working on is the Braille Keyboard – a tactile input device that can be used along with smart phones, tablets, and computers. He’s based the design around an Arduino micro with BLE for connection to a smartphone and a USB port for computer use. The device will be battery powered, and housed in a 3D printed case. It will have a set of 12 main buttons and 4 direction buttons contoured and positioned to help make typing easier, while a vibration motor will provide haptic feedback. A speech option is also planned to pronounce each character as it is typed. This one is still pretty much on the drawing board, but we do hope he takes it forward over the next few months to build and test some prototypes. 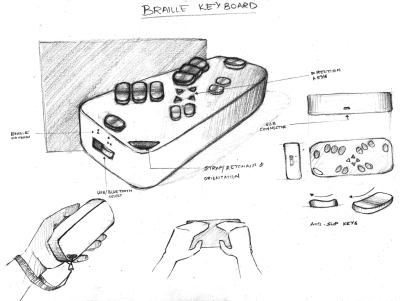