Plenty of materials take the heated edge of a laser beam quite well, but many others don’t. Some release toxic fumes; others catch fire easily. For all the materials that don’t cut well (PVC and FR4, we’re looking at you!) and for those that do (hello, acrylic and Delrin) they’re each reacting to the heat of the laser beam in different ways. Lucky for us, these ways are well-characterized. So let’s take a look at how a laser cutter actually cuts through materials.

But First: Why a Laser?

If we journey outside on a sunny day with a magnifying glass or, better yet, with a nice honking Fresnel lens from an old-school HDTV (thanks Jen!), we can focus the sun’s light down to a point and fry some ant–I mean–burn some leaves. Why not, then, just use a high power light source to burn through our materials? It turns out that there are two main reasons. For one, CO2 lasers emit a 10,600-nanometer wavelength that falls in the IR range. This wavelength just happens to be readily absorbed, rather than reflected, by wood and plastics, making it highly efficient for cutting since most of the light is absorbed as heat, rather than reflected and lost. However, there’s one additional reason why a laser, rather than just a humongous flashlight, is so much more effective at cutting materials.

To get into the nuts and bolts, we’ll need to take a look at some laser optics. First off, keep in mind that our laser is both collimated and of a single wavelength. A high power white-light source is neither of these, but let’s look at one variable at a time.

If we were to shoot a collimated (parallel) white light source through our lens, we still can’t achieve the same power density of a laser, which consists of a single wavelength, and here’s why. In the real world, no optical lenses are perfect, and the consequence of passing white light through an imperfect lens is that individual colors have slightly different focal distances. Laser light, on the other hand, consists of only a single wavelength, which means it wont experience this spectrum splitting issue that white light experiences.

The white light’s blue components focus more closely than it’s red components. The net result? Since we can’t focus all of the input light on a single point, we reduce our overall power-density.

Let’s examine the next case: uncollimated white light. Here, we get a similar result as in the first example. Collimated light refers to the fact that the majority of our photons are parallel with each other. Uncollimated white light, like that of a lamp, features light rays that travel in all directions. For the uncollimated light that enters the lens, the angle of incidence determines where it’s actual focal point will be. In other words, each light ray with a different entering angle will have a different distance from the exit of the lens before it reaches the center where the ideal focal point would be.

Laser light can be easily collimated, which means the light rays are traveling parallel to each other. Because this is the case, each ray that enters the lens will exit and converge at the same distance, i.e, the lens focal point.

Hence laser light, being both monochromatic and collimated gives it a higher energy density than it’s vanilla white-light contender. 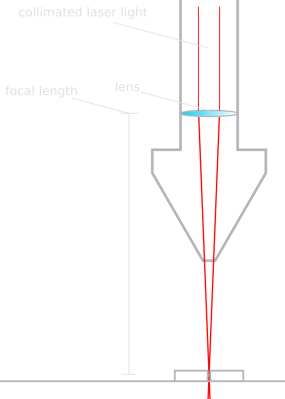 Upon entering the laser head, the laser beam reflects downwards off the final bounce mirror and into the lens, where it’s focused onto our part. From a side view, our photons exit the lens and follow the optical path we’d expect: two cones standing end-to-end. The center of these cones is the focal point where we pack the most power-per-unit-surface-area. This is the point that we want to focus onto our parts to do the actual cutting.

“But wait!” cries the budding optics engineer. “Won’t our parts have a tapered surface finish if we’re focusing our light down to a point?”

In fact, yes! As we can see in the side-view below, the part edge, smooth as it may be, is still tapered as a result of the focal length. The sad truth: while a longer focal length lens can reduce this tapering effect, it can’t remove it altogether. This is the reality of physics that we just can’t circumvent.

Nevertheless, for the dimensions that matter, we can using finishing tools like reamers to bring important features like holes to their proper size.

The Not-So-Many Ways of Punching Through Materials

Dumping a bunch of photons onto a small focused surface area might conjure up wonderful visions of complicated reactions taking place on the surface of our material. In reality, the physics of laser cutting really only falls into two categories: phase change or a chemical reaction. (For a bit more detail, I’ve split phase change into two categories.)

A small number of materials actually convert to gas phase when heated by laser. This list is pretty small, though, but among the list of safe materials are two heavy-hitters: acrylic and acetal homopolymer (Delrin). Vaporizing the material leaves a magnificent surface finish since we’re just changing the phase of the material that the beam hits as we move it along.

Better known as “melt-shearing,” most thermoplastics (but not Delrin or acrylic) experience melt-shearing while being cut. Because we’re liquefying the surface of the cut, the surface finish tends to come out slightly worse than the materials that simply vaporize.

To dress this one up, let’s say that the material “experiences a chemical reaction induced by heat,” but really, we’re just burning it, plain and simple. Thin plywood, by far, is the most user-friendly material in this category since the products are mostly just soot. For all the other materials that fall in this category, though, keep in mind that burning through the material will definitely release a host of products, some which can be deadly. PVC, for one, releases chlorine gas, so that one’s definitely on the no-no list.

The Importance of Air Flow 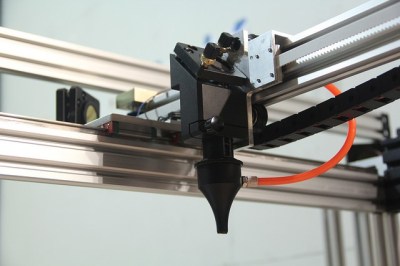 We see them on pretty much all commercial CO2 laser cutters, so it’s worth asking: “what’s the importance of having the nozzle with air shooting through it?” Preventing dust from entering the lens would seem like a natural explanation, but the air flow actually plays a much more important role. It turns out, that an axial flow of air helps redirect both any potential flames and melted material downward through the groove made in the cut.

Don’t believe me? I decided to do a little investigation with my homebrew 2x_Laser, Nessie. I ran two tests cutting an identical shape out of 0.09375-inch acetal homopolymer (aka: Delrin), one with the compressed airflow on and one without any compressed airflow.

Cut in two passes without a coaxial airflow

Cut in two passes with a coaxial airflow

On the left, let’s examine the edges of our cuts. Notice that the surface finish on the edges isn’t as clean as the right cuts that had a coaxial airflow. I attribute this poor surface finish to the melted edges of the cut bubbling over the surface of the part and then re-solidifying. On the right, the air assist blows the flame and particulates downwards, rather than letting them bubble onto the top.

That’s all for now! If you’ve picked up a few details in the dark arts of laser cutting, let us know! We’d love to hear your words of wisdom in the comments.

52 thoughts on “Up-Close And Personal With Laser Cuts”