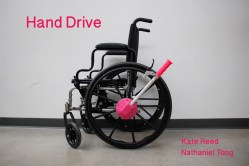 Think building something that solves a problem is too hard? Not true. Last year, [Kate Reed], a high school student, built a device that makes a wheelchair much easier. Her device, the Hand Drive, allows anyone in a wheelchair to use a rowing motion to move forward, instead of pulling themselves by the rim of the chair. It is perhaps the most clever and elegant device we’ve ever seen; it’s basically a ratchet that bolts onto a wheelchair, and if wheelchairs were around five hundred years ago, the Hand Drive would bolt right on to those antique chairs. For her entry, [Kate] was a finalist for last year’s Hackaday Prize, gave a talk at the Hackaday Supercon, and demonstrated her device to the president in the White House.

Is the simple tech behind a ratcheting wheelchair attachment not cool enough? Here’s a device that tells you to sit up. This device is just a few bits of electronics mounted to a chair that tells you to get up and walk around every hour or so. Deep vein thrombosis isn’t a joke, and for this entry to last year’s Hackaday Prize, [electrobob] was one of the 100 creators that made it to the finals.

If you have an idea for a project that solves a problem, start your project now. There’s nothing to lose, and we’re giving away $300,000 in prizes for people who build something that matters.