If there was one book that describes what it means to be in the trenches of a cutting edge design, that book is The Soul Of a New Machine. Tracy Kidder’s Pulitzer prize-winning book has been an inspiration to thousands over the years.

Soul is the story of the creation of the Data General Eclipse MV/8000, code-named Eagle. Eagle was Data General’s first 32-bit minicomputer. If you’re not a retrocomputing aficionado, minicomputers were a major industry back in the 70’s and 80’s. Starting in 1964 with the Digital Equipment Corporation (DEC) PDP-8, minis provided a low-cost means for companies to get a computer. The only other option was a huge mainframe from companies like IBM. Minicomputers chugged along until the 1990s when microprocessor-based PCs and workstations passed them by. The market, and the industry evaporated.

Today, more than 30 years later, minicomputers are all but forgotten. Data General itself is long gone, purchased by EMC in 1999. DG’s mark on the landscape has all but been erased by the swiftly moving sands of technical progress. All except for the snapshot Kidder set down in Soul.

The technical side of designing a new computer is just one part of this book. The Soul of a New Machine is three stories: the story of the engineers, the story of the managers, and the story of the machine they built. For this reason, the book has found itself on the reading list of engineering schools and management institutes alike.

The thing that makes this book appeal to the masses is Kidder’s uncanny ability to explain incredibly complex topics in layman’s terms. He manages to explain the inner workings of a 32-bit CPU, all the way down to the level of microcode. He delves into Programmable Array Logic (PALs), forerunners of the CPLD and FPGA devices you read about on our pages today. PALs were a hot new technology back in the late 70’s. They allowed the Eagle team to make changes quickly — without pulling out their wire wrapping tools.

Kidder manages to explain these things in a way that doesn’t leave the average Joe scratching their head, yet doesn’t bore the technically savvy. If he ever decides to stop writing non-fiction, Tracy Kidder would have a career writing user manuals.

The Soul of a New Machine starts in a very unlikely place – on the deck of a sailing ship during a rough storm. The scene is our introduction to the star of the book – Tom West, a manager at Data General. West is multifaceted and enigmatic to say the least. A folk guitarist who was inspired to work on electronics by the Apollo program. He was a few years too late for NASA though. Eventually he found himself travelling the world building and adjusting incredibly accurate clocks at astronomical observatories for the Smithsonian. This meandering path eventually led him to DG, where he was hired as a computer engineer and quickly worked his way up the ranks.

Data General was already working on a 32-bit computer at this point. The company’s best and brightest engineers had started on “Fountainhead”, which was a no holds barred next generation machine. Disputes over taxes between Data General and the Massachusetts government caused the company to move the entire FHP team to North Carolina’s RTP. West headed up the group which designed Eclipse computers – the bread and butter 16-bit minicomputers which kept the lights on at Data General. This set the stage for a bitter inter-company rivalry, as well as fierce competition for resources. Several of West’s programs were cancelled before they ever got out the door. To put it bluntly, he was pissed.

West went to CEO Edson de Castro and asked what he wanted. The answer was simple: A 32-bit Eclipse without a mode bit.

Of Men and Mode bits

Any company has to deal with old products. In the computing world, the term is legacy. In the computing industry, it’s a particularly nasty problem. New generations of a computer usually need to be compatible with the older ones. Breaking compatibility would mean all the customers software has to be ported — a long and arduous job that opens the door for a competitor to swoop in.

How does a designer add new features, yet maintain compatibility with older software? The answer is often a mode bit. In “legacy mode” the new machine acts exactly like the old generation. Switch to “modern mode” and the true power of the new computer is unlocked. The problem is that future generation machines will need a different mode bit for compatibility with every generation that came before it. A (simplified) example of this is Intel’s x86 architecture. The 286 had to be compatible with the 8086, so protected mode was created. Fast forward to x86-64, and we’re up to 7 modes, switching between 16, 32, and 64-bit systems.

West couldn’t build a computer on his own. He pulled in lieutenants Carl Alsing and Ed Rasala. Together they recruited a team of 20-somethings, fresh out of college. The engineers fell into two groups – The Hardy Boys, who designed the hardware, and the microkids, who wrote the microcode.

Everyone on the project performed an informal ritual of “signing up” — a term coined by West. An engineer signing up for a project agrees to go above and beyond the call of duty to ensure the project succeeds. Saturdays, Sundays, 90+ hour weeks, whatever it took. All this came at the cost of the engineer’s personal life. Getting fresh college grads to sign up was easy.

West wasn’t a friendly manager. He didn’t say hello, or even acknowledge his new recruits in the hallways. One even nicknamed him “the prince of darkness”. It was all a form of mushroom management and clever (if immoral) manipulation to get the most out of the team. On the other hand, West insulated his team from the distractions of upper management. They toiled away in a basement hidden from view.

It’s with West and these engineers that Kidder spends much of the book. He became embedded, visiting the workers’ houses, meeting their families, looking at the hobbies and artwork they spent time on before the Eagle project. Learning their hopes, dreams, and what drove them to work as hard as they did.

This is after all, a book about history, so stop here if you don’t want any spoilers. Suffice it to say the team eventually did get the Eagle out the door. In a political move, West was shipped off to Data General Japan. The Eagle was broken up with many of them leaving the company to find new jobs. If any of them were expecting accolades and stock options from the company, they were slow in coming. Wired magazine checked in on the engineers back in 2000. Now, as the 20-somethings of 1978 approach retirement, you can find them on LinkedIn and other social media sites. 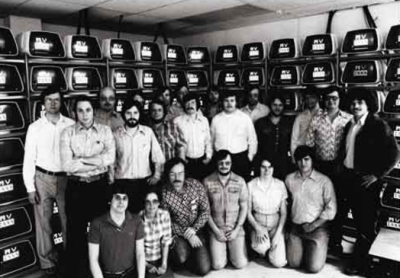 Once the book went to print, the team, especially West, became minor celebrities in the computer industry. Data General used this to their advantage, trotting West out whenever they could to sign books and promote new designs. He wasn’t exactly happy about that, but he stayed with the company until 1998, when he retired. West passed on in 2011. His obituary made the New York Times. His daughter, Jessamyn West, an accomplished librarian and MetaFilter staffer, posted a link to his Flickr page. While it doesn’t contain many photos of the Data General Eagle project, It does have shots of Tom’s fabled home workshop.

The story of the Eagle isn’t unique, in fact, nearly every company has a story that the staff reminisces about. One about a project where people put in crazy hours, and got the work done against all odds. The difference is that this project was put down in words everyone can understand and relate to. Tracy Kidder’s abilities can’t be overstated here.

The Soul of A New Machine had an impact on engineers at the time, and in the decades since. I found one example talking to the Hackaday writing staff: An engineer working on the Commodore 128 was told to remove the 128/64 mode bit. It almost worked, except for a bug in the font ROM which was brought to light by the popular koala paint program. [Bil Herd], lead hardware designer on the 128, had read the book too. He decided to keep a pseudo-mode bit handy, essentially a summation of all the things that were switched on in 64 mode. [Bil’s] insurance policy paid off with this bug. The 128/64 mode bit was used to switch between the original C64 font ROMs and the extended 128 ROM.

46 thoughts on “Books You Should Read: The Soul Of A New Machine”