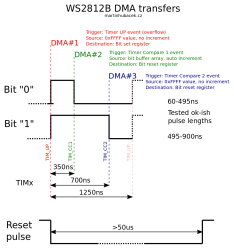 The advantage of this GPIO/DMA setup over other methods is that it can drive a whole bank of pins — up to 16 strips simultaneously for the STM32F10x chips. It also loops the graphic buffer around so that you can drive repeating patterns without using much memory. And all the CPU has to do is load up the DMA buffer when it’s (half) empty, which means that even with a full load of LEDs, it’s still got most of its time left for number crunching.

Finally, to show off, [Martin] pulled a sweet trick and captured it on video. Since the digital signals are on/off encoded for the red, green, and blue channels, he decided to experiment with digital color mixing. He ands and ors two simultaneous signals together and demonstrates that it works just as you’d expect. Check it out in the video below.