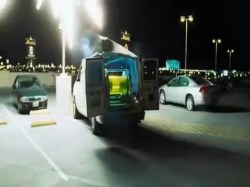 While there’s no explicit dividing line between causing your neighbor’s wireless router to drop a few packets and destroying the electrical grid, many things produce an EMP in the course of their normal operation. You probably operate a machine that produces thousands of tiny EMPs per minute: your car. Every time a spark plug operates, a little EMP is generated. 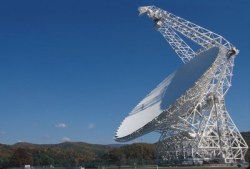 While most governments regulate the amount of EMI that these devices can radiate, there are some areas where even a tiny bit is intolerable and anyone nearby must drive diesel vehicles that don’t have spark plugs. Usually these areas are near radio telescopes that are sensitive enough to be affected by the tiniest electromagnetic noise of any kind.

A spark plug is just one thing that uses a spark gap to do something useful. Spark gaps are used in some old radio transmitters (although their use is now heavily regulated to the point of near-extinction), and even as high voltage protection devices in electrical substations. Each of these devices will produce a relatively small EMP as a side effect when they operate. For larger EMP, however, we first have to turn to mother nature and her own spark gap: lightning strikes.

This is the crux of why someone would want to develop an EMP weapon. In modern times, disabling electric and electronic devices is crippling to almost everyone. Since any conductor can and will absorb the energy from an EMP, almost everything will be affected. Militaries around the world have come up with some interesting ways to generate EMP pulses in order to disable their enemies without the collateral damage of explosives. The more powerful EMP devices are driven by explosives, though, so there will still be a sizable blast to deal with.

Of course, these types of weapons are very targeted and would affect only a small area. As we have seen already, it’s difficult to keep energy focused over long distances. To really do some damage, the beam has to be very tight or the device nearby. Or, a nuclear weapon could be deployed. A side effect of detonating any nuclear device is an incredibly large EMP. Compared to a non-nuclear device, these produce a million times stronger EMP for a given weight. 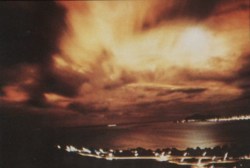 In the early days of the atomic bomb it wasn’t quite understood just how severe this problem was, but the United States quickly found out. During the Starfish Prime test, a 1.44 megaton nuclear bomb was detonated at 400 kilometers above the Pacific Ocean. The EMP was strong enough to cause damage in Hawaii, over 1,400 kilometers away from the blast. The ramifications of a weapon of this sort detonated over a major city are certainly a concern, especially to a nation’s electric grid which would bear the brunt of the force and almost certainly be destroyed. The only good thing about this is that access to nuclear weapons and access to a delivery system (a rocket) is quite hard to come by for the average person and there are much easier ways to take out large parts of the electric grid if you’re so inclined.

Besides as a weapon or a nuisance to radio astronomers, there aren’t too many things that actually make use of EMP to do useful work. There are some metalworking shops that use a technique called electromagnetic forming to shape objects using EM pulses, and there are some piezoelectric generators that can convert a large force into an EMP to form a spark for a lighter or camping stove, for example. There are also some purpose-built radio jammers that can perform a similar action as an EMP, but these are very specialized to work in a controlled manner and in a narrow frequency range rather than the broadband effect that EMPs generally have.

It’s rare that we recommend against exploring some topic for DIY research, but it may be the case that EMPs are just too difficult and too dangerous to play around with. Unless you want a surprise visit from the FCC, the FBI, or any other ominous three-letter agency, you may either want to leave these devices alone unless you’re creating the next summer blockbuster movie.