Protel Autotrax is a PCB design tool first released for DOS in the mid-80s. Consider this a look at the history of PCB design software. I’m not recommending anyone actually use Protel Autotrax —  better tools with better support exist. But it’s important to know where we came from to understand the EDA tools available now. I’m rolling up my sleeves (about 30 years worth of rolling) and building our standardized test PCB with the tool. Beyond this, I suggest viewing EEVblog #747, where [Dave] digs into one of his old project, Borland Pascal, and Protel Autotrax.

This is the continuation of a series of articles demonstrating how to Create A PCB In Everything. In this series, we take a standard reference circuit and PCB layout — a simple ATtiny85 board — and build it with different PCB design tools. We’ve already covered Eagle in this series. We learned Fritzing is a joke for PCB design, although it is quite good for making breadboard graphics of circuits. Each of these tutorials serves as a very quick introduction to a specific PCB design tool. Overall, this series provides for a comparison between different PCB design tools. Let’s dig into Protel Autotrax.

A short history of Protel, Altium, and Autotrax

The company we know as Altium today was, for the first fifteen years of its existence, known as Protel. Back in the day, PCB design on a computer required a dedicated workstation, a lot of hardware, light pens, and everything was extraordinarily expensive. Protel was a reaction to this and the first product, Autotrax, was a DOS-based program that brought PCB design to the PC. A freeware version of Autotrax is still available on the Altium website and can be run from inside a DOS virtual machine or DOSBox.

Interestingly, Protel Autotrax is not the only PCB design software named Autotrax. A company called DEX 2020 has also has a PCB design software called AutoTRAX. This is weird, confusing, and I can’t figure out how this doesn’t violate a trademark. If anyone has any insight to what the Protel / Altium legal department was doing a few decades ago, your wisdom is welcome in the comments.

There are three major steps to creating a PCB in any piece of software. First, you create the schematic. This schematic is simply a collection of parts and symbols tied together with nets. Second, this schematic is turned into a board file, where parts and pads are placed, nets are turned into traces, and the mechanical definitions of the board are created. Third, this board is exported into something a plotter, laser printer, or OSH Park can understand. These three processes are found in every single PCB design tool to varying degrees.

Autotrax is ancient, and with that, we should expect some weirdness. Autotrax does not have a ‘schematic creation’ mode. Instead, schematics should be created in another CAD program (Protel Schematic would be the best for Autotrax), the netlist exported, and the board built from that. Alternatively, pen-and-paper DaveCAD will suffice.

If this tutorial were about designing a circuit board from scratch, this would be a very bad thing. The good news is we already know what the circuit is and what the board looks like. It’s a simple circuit in any event. Therefore, we can use most of the parts out of the standard Autotrax library, duplicate our board, and everything should work.

Autotrax is the digital equivalent of layers of mylar, tape, and an Xacto knife. To place a part, you place a package. This is highly unusual compared to modern PCB design tools, but with Autotrax, the onus of getting the circuit right is on the designer. In the above graphic, I’ve already placed the ATtiny85, the pin headers, and a decoupling cap. The next task is to place a few 0.3″ axial components for the resistors, a few packages for the diodes, a button, and a USB micro port.

Placing the resistors for this circuit is as simple as using the Place Component hotkeys and looking through the library. Here, all the packages you would expect from a 1980s design tool can be found. PGAs were popular back then, and while SMD resistors can be found in the depths of the standard component library, it’s obvious through hole axial components are the rule. 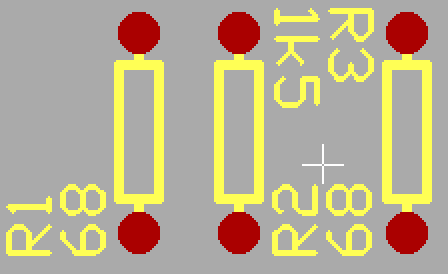 After selecting the desired component, you need to select a component designator. This is the part name, usually numbered sequentially, and usually with a one-letter prefix (R for resistor, C for cap, U for a chip of some kind, L for an inductor, etc). Once the component designator is assigned, you give the part a comment — a value. I’m using 68Ω and 1.5kΩ resistors, so my comment for these resistors is ’68’ and ‘1k5’. In the interests of sanity and legibility, I’m going to remove these designators and comments from here on out.

All of the posts in this series cover making a part from scratch. Usually, this means recreating the ATtiny in whatever software package I’m working with. Autotrax is weird, though, and I already have a DIP8 in the component library. Therefore, I’m going to create a package for the universal tact switch used in the reference design. 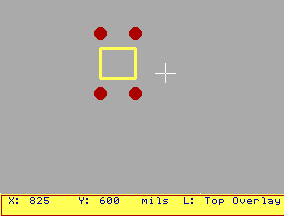 Saving the work I’ve done so far, I need to clear everything that’s currently in the Autotrax window. Then, it’s a simple matter of placing pads and top overlay (top silkscreen) tracks where they should go. I think I got it pretty close.

Turning this collection of pads and tracks into a part requires defining a new block, drawing a rectangle around the part, and creating a new library to store the new part. After that, I load up the PCB file I was working on and drop the part in:

Since I won’t be adding a micro USB port to this board, I’m done placing the parts. All I need to do is draw traces between each part, and draw a board outline.

Like placing components, placing traces is an adventure in hotkey madness. Select Place, Trace, and draw the lines where they should go. Once that’s done, you can add fills for ground and power planes, and finally connect pads to those planes by editing individual pads. 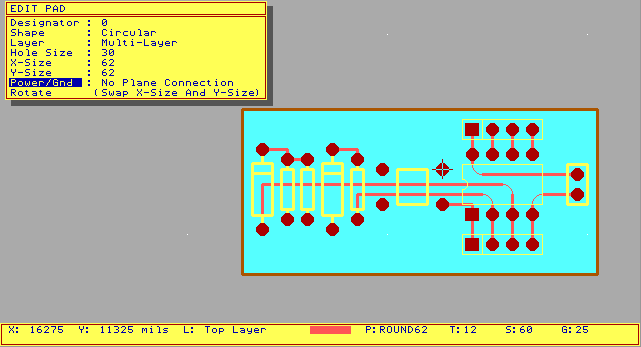 Although the title of this series of posts is, “Creating A PCB In Everything”, this specific post does not go over step by step how to create the reference circuit and PCB in Protel Autotrax. To be honest, I’ve completely ignored the USB port on the reference circuit, the circuit itself doesn’t work, and turning this design into a PCB requires a physical plotter or software I don’t have. This is by design. You shouldn’t use Autotrax for Real Work™ in the year 2016. Consider this post a benchmark of what PCB design was in 1988.

Protel Autotrax was one of the first pieces of software that brought PCB design to the masses. As such, the UX is the closest thing to tape, mylar, sharpies, sensitized copper clad board, and Xacto knives that DOS has to offer. This is the beginning of an entire industry. Over the last three decades, the state of the art in PCB design has improved enormously. Now, we have parts libraries that include parts, and not just packages. We have push and shove routing. We have mice with two buttons and displays with better than EGA resolution. Autotrax is where it started, though, and until I can find a source of Rubylith or those neat IC tape sticker things, this will remain the pre-history of how to Create A PCB In Everything.

36 thoughts on “Creating A PCB In Everything: Protel Autotrax”