We recently went through our twice yearly period of communal venting called adjusting for daylight saving time (DST), or British Summer Time (BST) as it’s called in the UK. But why are we changing the time? Seriously, who caused all this? Does it do any good? Do we still need it? And what can we do about it? As it turns out, most of us want it, as you’ll see below.

We Live In Good Times

A common misconception is that DST is for helping farmers. However, farmers have actually opposed it. Farmers have to do much of their farming based on when the sun is up. Setting the clock back in the fall, which is harvest time, means less time to get crop to market. Cows also don’t adapt well to the change in milking schedule, but hired workers work according to the clock.

Another misconception is that Benjamin Franklin invented daylight saving time. In an anonymous letter, Franklin suggested only that his fellow countrymen work during daylight hours and sleep when it was dark. This was to save on the expense of candles during the early morning. However, he didn’t mention adjusting the clocks.

The first modern proposals for saving daylight came from New Zealand entomologist George Hudson in 1895 and independently, William Willett, a builder and outdoorsman in England in 1905. Both were fond of time spent in daylight outdoors in the evening. Hudson proposed advancing the clock by two hours on October 1st and back again March 1st. Willett, interestingly, proposed moving the clock by 80 minutes in increments of four 20 minute weekly steps. Neither succeeded in getting the changes to occur.

Going to War and Saving Time

Wide adoption of the time change had to wait for World War I. In April, 1916 the German Empire and Austria-Hungary both were the first countries to adjust the clock forward in order to conserve coal. By 1918 many other countries had followed suit. However, with some exceptions, including Canada, the UK, France and Ireland, the practice was abandoned after the war. Over the years that followed various countries occasionally adopted and dropped it again, including during World War II.

In the US, from 1945 to 1966 there was no federal law regarding daylight saving time and so it was up to localities to decide if they wanted to keep using it. But in 1962, the transportation industry was finding the patchwork of different times problematic and pushed for federal legislation, resulting in the Uniform Time Act of 1966. As of 1967, standard time was mandated with time changes on the last Sunday of April and the last Sunday in October, though states could opt out.

The Uniform Time Act was amended in 1986 to have the daylight saving time last longer by having the change occur in the first Sunday in April instead of the last. Among the biggest lobbyists for the 1986 change were the barbecue grill and charcoal industries as well as the golf industry, all of whom would benefit from the extra outdoor evening activity.

Then in 2005 another month was added to DST in the US, this time by moving it to the 2nd Sunday in March and first Sunday in November. Lobbyists for the change included the Sporting Goods Manufacturers Association, the National Association of Convenience Stores (NACS) and, interestingly, the National Retinitis Pigmentosa Foundation Fighting Blindness (retinitis pigmentosa’s symptoms include decreased night vision). The NACS serves both convenience stores and the fuel retailing industry, the implication again being that having more leisure time in the evenings with daylight would cause more people to venture outdoors and away from home doing outdoor activities, benefiting those industries.

So in summary, why do we have daylight saving time? Initially it was to save energy resources during wartime. In the US it was later spurred on to clean up a patchwork of different times and more recently to benefit industries that make money from outdoor evening activities.

Do We Still Need It?

Some may say that with increasing technological and urban society, we may not need it anymore and that farming is becoming ever more automated. However, as we’ve pointed out above, the reasons for introducing daylight saving time have had to do with energy savings and encouraging evening outdoor activity, and not with farming.

Does it really result in an energy savings? In response to the 2005 change in the US, extending it by a month, a study was done by the Department of Energy for Congress looking at the effect 2007 had compared to prior years without extended daylight saving time. From analyzing data of the output of 35 utilities, statistical analysis showed an electricity savings of 0.03% of the total national electricity consumption of 3,900 TWh in 2007, amounting to 0.46% to 0.48% for each day of extended daylight. Comparing the regions, the North saved 0.51% and the South 0.42% daily. So though there are regional differences in savings, overall the savings is small.

The study also found through statistical analysis that there was no measurable impact on passenger vehicle gasoline consumption or traffic volume in 2007.

As for evening outdoor activity, one way to measure it is by TV viewership. Every year TV viewing in the early evening drops in lock-step with the clock going forward. This is measured with TV ratings in the US. Most telling is that this happens even for News shows, which have a fairly constant subject matter. In March 2015 it was reported that ABC, CBS and NBC evening news programs collectively lost three and a half million viewers compared to the previous, pre-DST week. Clearly people do take advantage of the extra hours of daylight.

If the numbers from convenience stores that sell gas are to be relied on, the 2005 change resulted in an added $1 billion in gasoline sales. Similarly, the barbecue grill and charcoal industries say they earn an extra $200 million.

So rather than say we still need daylight saving time, it looks more like we still want it, no matter how much we groan about adjusting the clock. We use it to go to sporting events, golf, or visit friends for a grilled steak. At least that’s what the data indicates.

Health, Happiness, and Even Crime

But that’s all to do with the latitudes of the US. At more northern latitudes such as those in Canada, England and even further north, Scotland, the winter hours become more of a focus. The shortest day in Edinburgh, Scotland, December 21st, is just six hours and 57 minutes long. People go to work in darkness and return home in darkness. In that case the argument could be made for keeping daylight saving time, called British Summer Time (BST) in the UK, all year round.

Daylight saving does appear to have an effect on crime. A 2012 study from Stanford University about the effect of the spring time change on crime found that robberies decreased by 40% when comparing the period with more evening daylight to that with less.

There are also studies that show it can have a negative medical effect. A study in Denmark of depression cases in psychiatric hospitals of cases from 1995 to 2012 found an 11% increase in severe depression during the period immediately after the change when the clock is moved back and darkness comes earlier at the end of the day, with a gradual decrease after 10 weeks. There’s also a study by the University of Alabama that found a 10% increase in the risk of a heart attack on the Monday and Tuesday following setting the clock ahead in the spring, some attributing it to sleep deprivation.

There are also multiple studies showing increased injuries in the workplace on the Monday following the switch to daylight saving time. One study by doctoral students at Michigan State University, analyzing injuries reported to the Mine Safety and Health Administration, found that on average 3.6 more injuries occurred on the Monday and 2,649 more days were lost as a result, a 68% increase.

And what about the rest of the world? Some of us are so caught up in our obsession with these twice-yearly changes that we don’t realize that much of the world doesn’t make them, as the following map shows. The blue and orange are the areas that do make them (the different colors are for the different hemispheres), the light grey areas don’t anymore but did at one time, and the dark grey areas never have. 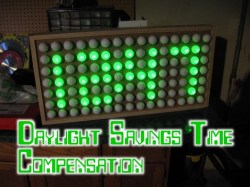 And so it appears there’s an opportunity here. We want daylight saving time for spending time outdoors in the evening but we don’t like adjusting our clocks. Who better is there to modify all those clocks to be self-adjusting than the Hackaday community?

Searching Hackaday brings up surprisingly little on this though. There’s a fix for a Heathkit clock that forces you to cycle forward only, fixing what would otherwise be a cumbersome adjustment. And then there’s our own fearless leader [Mike Szczys]’s automatic daylight compensation for his delightful Ping Pong Clock, and that’s about it! Where’s the robot arm that playfully reaches out from inside the cuckoo clock to give the minute hand an extra rotation? Or how about a master clock to rule all your other clocks so that there’s only the one adjustment to be made?

To end on a personal note, I like fooling myself in the fall by waking up without having adjusted the clock back, and then adjusting it back and being silly with delight at having gained an extra hour for the day. Conversely, I don’t like setting it forward in the spring — groan, lost an hour in my day. But I take advantage of the extra time cycling or reading outside in the evening. As I write this, however, it’s winter, 4:30 PM and it’s dark outside, and to keep active outdoors in the evening, I have to keep reminding myself that it’s not night. There clearly are both whys and why nots to this issue.

87 thoughts on “Daylight Saving Time – Whys And Why Nots”