Dealing with breakdowns is certainly nothing new for drivers; plenty of us have had our ride die in mid-flight, and experienced the tense moment when it happens in traffic. But the highly integrated and instrumented nature of the newest generation of electric vehicles can bring an interesting twist to the roadside breakdown, if the after-action report of a Tesla driver is any indication.

While driving on a busy road at night, driver [Pooch] reports that his Tesla Model S started beeping and flashing warnings to get to the side of the road right away. [Pooch] tried to do so, but the car died, coasted to a stop in the middle of the road, and engaged the parking brakes. The bricked Tesla would have been a sitting duck in the middle of the road but for a DOT crew who happened to be nearby and offered to provide some protection while [Pooch] waited for help. The disturbing part was the inability to get the car into any of the service modes that might let it be pushed off to the shoulder rather than stuck in traffic, something that’s trivial to do in ICE vehicles, at least older ones.

In other electric vehicle news, Chevy Bolt owners are turning into the pariahs of the parking garage. General Motors is telling Bolt EV and EUV owners that due to the risk of a battery fire, they should park at least 50 feet (15 meters) away from other vehicles, and on the top level of any parking structures. There have been reports of twelve battery fires in Bolts in the US recently, which GM says may be due to a pair of manufacturing defects in the battery packs that sometimes occur together. GM is organizing a recall to replace the modules, but isn’t yet confident that the battery supplier won’t just be replicating the manufacturing problem. The social distancing rules that GM issued go along with some fairly stringent guidelines for charging the vehicle, including not charging overnight while parked indoors. With winter coming on in the northern hemisphere, that’s going to cause a bit of inconvenience and probably more than a few cases of non-compliance that could end in tragedy.

Fans of electronic music might want to check out “Sisters with Transistors”, a documentary film about some of the pioneering women of electronic music. Electronic music has been around a lot longer than most of us realize, and the film reaches back to the 1920s with Theremin virtuoso Clara Rockmore, and continues on into the 1980s with Laurie Spiegel, whose synthesizer work has been speeding away from Earth for the last 44 years on the Golden Records aboard the Voyager spacecraft. Hackaday readers will no doubt recognize some of the other women featured, like Daphne Oram and Delia Derbyshire, who cobbled together the early Dr. Who music with signal generators, tape loops, and random bits of electronics in the pre-synthesizer days of the early 60s. We’ve watched the trailer for the film and it looks pretty good — just the kind of documentary we like.

We’re big fans of circuit sculpture around here, and desperately wish we had the patience and the skill to make something like Mohit Bhoite or Jiri Praus can make. Luckily, there’s now a bit of a shortcut — Geeek Club’s Cyber Punk PCB Construction Kit. These kits are a little like the love child of Lego and PCBWay, with pieces etched and cut from PCB stock. You punch the pieces out, clean up the mouse bites, put Tab A into Slot B, and solder to make the connection permanent. Each kit has some components for the requisite blinkenlight features, which add to the cool designs. Looks like a fun way to get someone started on soldering, or to build your own skills.

And finally, another nail was driven into the coffin of Daylight Savings Time this week, as the island nation of Samoa announced they wouldn’t be “springing ahead” as scheduled this weekend. Daylight Savings Time has become a bone of contention around the world lately, and mounting research shows that the twice-yearly clock changes cause more trouble than they may be worth. In Europe, it’s due to be banned as soon as all the member nations can agree on normal time or summer time.

In the case of Samoa, DST was put into effect in 2010 on the assumption that it would give plantation workers more productive hours in the field and save energy. Instead, the government found that the time change just gave people an excuse to socialize more, which apparently upset them enough to change the rule. So there you have it — if you don’t like Daylight Savings Time, start partying it up. 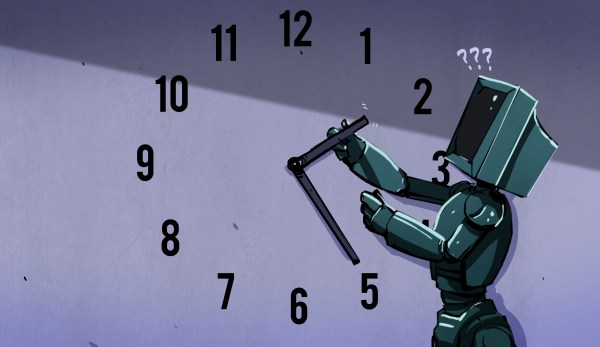 We recently went through our twice yearly period of communal venting called adjusting for daylight saving time (DST), or British Summer Time (BST) as it’s called in the UK. But why are we changing the time? Seriously, who caused all this? Does it do any good? Do we still need it? And what can we do about it? As it turns out, most of us want it, as you’ll see below.

END_OF_DOCUMENT_TOKEN_TO_BE_REPLACED

[Victor-Chew] is tired of setting clocks. After all, here we are in the 21st century, why do we have to adjust clocks (something we just did for daylight savings time)? That’s why [Victor] came up with ESPClock.

Based on a $2 Ikea analog clock, [Victor] had a few design goals for the project:

The last goal is the only one that remains unmet. Even with a large battery pack, [Victor’s] clock runs out of juice in a week or so. You can see some videos of the clock syncing with network time, below.

END_OF_DOCUMENT_TOKEN_TO_BE_REPLACED 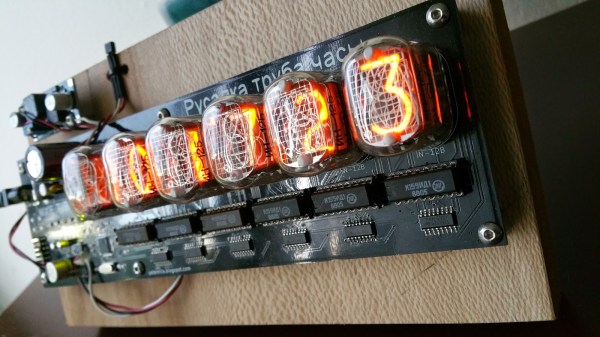 There’s something about Nixie Tube Clocks that keeps drawing hackers to build their own iterations, even if its been done a gazillion times before. Their depleting supply, and the high voltage drivers to control them, makes it all the more interesting. [Pete Mills], a veteran of several interesting projects, many of which we have featured here, is no exception and decided to build his own version of a Nixie Tube Clock, but with several nifty features.

To put it in a nut shell, his Clock uses Nixie tubes for display, has USB serial communication, temperature measurement, AC frequency measurement, time and date keeping with a software based RTC, software driven boost converter for the 175V DC nixie tube supply and a windows app for clock configuration.

The software based time keeping is pretty interesting. It is essentially a method to calibrate the crystal to more closely match real time, and some code to keep track of the time and date.  This obviously leads to a reduction in components and the spin-offs that comes with that; increased reliability, cost reduction, real estate savings. The RTC code can easily be ported to other clock projects irrespective of the display used. Besides keeping track of time and date, it can also account for leap years, and report the day of the week. A zero-crossing detector connected to the low-voltage transformer supply that powers the clock can also be used as an alternative way of keeping time.

When connected to a serial console over UART, the clock can report back many variables depending on the queries it receives. The high voltage DC needed to drive the Nixie tubes is generated using a simple boost converter controlled by the micro controller. An important “gotcha” that [Pete] deduced after blowing off several fuses, was to disconnect the micro controller port connected to the PWM timer and explicitly set it to output low via software. There’s a couple of other issues that he ran into – such as board layout, power supply, incorrect pullups – that make for interesting reading. The clock enclosure is still work in progress, but [Pete] hopes to get it done sometime soon.

He also wrote a Windows application – Nixie Clock Communicator – to help with time setting and calibration. Finally, he describes in detail the process of calibrating the clock’s software based RTC. Based on his calculations, the clock will drift by about 48 seconds over an 8 month period. Since he will be adjusting for DST much sooner than that, his clock ought to be off from correct time by not more than a minute at any given time. Not bad for a clock that does not use a dedicated RTC chip. [Pete] still has some of the prototype boards to give away if someone is interested. If you’d rather build it yourself from scratch, [Pete] has posted the software code, schematics and PCB, and a BoM.