The core concept is to provide assistive feedback which will help Loreli’s body get better at relearning how to command her affected bicep and tricep.

There’s a hard limit on weight for this project. That’s because too much weigh on the shoulder and it can be pulled out of the socket due to the current weakness. Hopefully this will also improve with time, but for now the assistive device needs to weigh less than 150 grams.

The actuator must be able to move the mass of her forearm (about 400 g). Input should come from the bicep and tricep using electromyography. They also want a relatively long battery life of at least five hours, and for the final product to look nice, lest she not want to wear it.

How do you build something with no prior experience? For regular Hackaday readers that’s not a real question… we do it all the time. Bodo didn’t have experience with most of what went into this project, but cites his entrepreneurial experiences in tackling hard problems. The trick is to learn what it is you don’t know and then ask for help in those areas when needed.

What we really like is that he didn’t just build this for her but built it along with her. The two of them started researching what kind of things other people had built: how people were taking muscle signals and using them to move things. They came up with some ideas, when hitting road blocks they asked for help and the world responded. 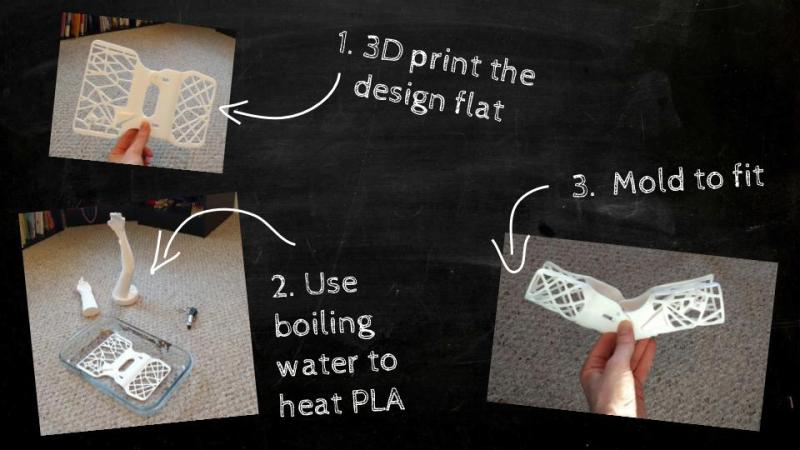 They received help in learning how to 3D scan Lorelei’s arm for the best fit. A company in Canada sent them some actuators that met their weight, size, and power constraints. When they tested out the EMG sensors they discovered the signals on her damaged arm were almost completely lost in the noise. Again, help came in from a company working on a very similar problem. A new seventeen-sensor method was adopted that uses machine learning to find those signals. Most recently they have turned this into a video game — Lorelei is retraining her body by moving an arm onscreen. Gamification of physical rehab? Yes please!

The physical prototype is moving right along. It was first assembled with Fischer Technik. With that proof in hand they 3D printed a lattice out of PLA. This was designed from the 3D scan of her arm, printed flat, then submerged in boiling water to soften it before being molded to a full-sized cast of her arm. The result is visually pleasing, light weight, sturdy, and well-fit to her arm.

It is very rare that children who have loss of muscle control from this condition are able to gain it back. But some progress has already been made. We think it’s amazing to see an outpouring of goodwill to help Bodo and his daughter in this endeavor and it has far-reaching benefits. She is learning a lot about engineering and what is possible in life. And they have built an example for others to follow when they are met with obstacles they need to overcome.

10 thoughts on “This DIY Wearable Assist Goes Beyond Traditional Therapy”