In the early years of the nineteenth century, steam engines were at work in a variety of practical uses. However, they were still imperfect in many ways. One particular problem were the boilers, that had a tendency to explode, causing injuries and fatalities. Reverend Dr. Robert Stirling, a Scottish clergyman, was concerned about the death toll from exploding boilers. Based on previous work by George Cayley (known for his pioneering work on aeronautics), Stirling filed his patent for a safer engine in 1816. That makes this year the bicentenary of this engine. The Stirling engine has the highest theoretical efficiency of any thermal engine. It is also a relatively simple machine. Unlike other types of engines, there are no valves, and that makes the mechanical design much simpler.

Principles of a Stirling Engine

In a Stirling engine, as with any other heat engine, there are two zones at different temperature,

There are two basic configurations for a Stirling engine, one is the beta type that we discussed above; the other is the alpha type, shown at the left. The principle of operation is the same. In the alpha engine, there are two power pistons that join at the same point in the crankshaft, and the gas is shuttled between the two cylinders. One key component and the basis of the 1816 patent is the regenerator, basically a heat exchanger that is placed between the hot and cold zones. The regenerator retains heat that would otherwise be lost to the environment, increasing the thermal efficiency. There are many variations in design that use the Stirling cycle, such as:

Waiting for Material Science to Catch Up

Stirling continued to make refinements to the design, with the aid of his brother James (an engineer). Their engines were produced and sold as an alternative to the steam engine. But in order to achieve maximum power and efficiency, the Stirling engine needs to operate at high temperatures. The materials available in those early years simply were not up to the task, resulting in frequent failures. At the same time, the steam engine evolved and became safer.

Stirlings also were considerably larger than a steam engine of the same power. Because of that, they took a back seat to other competitors, mainly steam and the new internal combustion engine. Stirling engines were confined to low power applications, such as ventilators, water pumping and providing air for church organs. But eventually, even in this applications the technology was replaced by the electric motor. The development of steel solved many of the engine failures, but it was too late. In 1876, Stirling wrote:

…These imperfections have been in great measure removed by time and
especially by the genius of the distinguished Bessemer. If Bessemer iron or steel had been known thirty five or forty years ago there is scarce a doubt that the air engine would have been a great success… It remains for some skilled and ambitious mechanist in a future age to repeat it under favorable circumstances and with complete success….

Further development of the engine halted, until the mid-1930s, thanks to the Phillips Research Laboratory in Eindhoven. In order to boost the sales of its tube radios, Phillips wanted a small, quiet and thermally powered electric generator for remote areas. In 1951, they succeeded in developing a Stirling generator capable of generating 200 watts of electrical power, but the price was not competitive.

By that time, transistor radios made their debut. With minimum power requirements, they could be powered with batteries, and the Stirling generator was no longer needed. However, the research by Phillips produced a wealth of new knowledge for further development of the Stirling engine. In fact, they developed in parallel a cryocooler, which is considered the only commercially successful application of Stirling engines. The engine, working in reverse, produces a temperature difference when mechanical work is applied to the shaft. Temperatures as low as -200 C can be obtained, enough to liquefy air.

There were efforts to develop an automotive version of the Stirling engine. In 1986, the MOD II project produced an engine capable of 38.5% thermal efficiency (modern automotive engines are in the 20-25% range). The engine was tested in a Chevrolet Celebrity notchback, and the urban gas mileage was increased from 26 to 33 mpg. One disadvantage was that the startup time was of around 30 seconds. However, Ford developed a version with internal heaters that could start the engine in a few seconds. Lack of interest by automakers and cutbacks in research funding prevented the continued development of an automotive Stirling.

Besides the cryocooler, the Stirling engine is in use in some other niche applications. The free piston Stirling engine (FPSE), uses an alternating magnetic field to drive the piston and generate a temperature difference. Thanks to the magnetic drive, there is no need for seals or gaskets, and the unit can be completely sealed. Because of its high reliability, it is being used by NASA to cool instrumentation in satellites.

Possible future uses include desalination units, such as the slingshot, invented by Dean Kamen, that uses water vapor distillation to purify water. It can use any form of fuel to power its Stirling engine. In solar power, Stirling engines are being tested by placing them in the focus of parabolic mirrors and driving 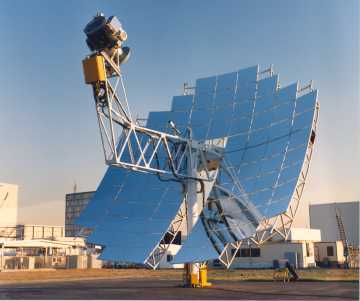 electric generators. With this setup, the efficiency is better than with non-concentrated photovoltaics.

They have also been proposed to replace steam turbines in nuclear power plants, eliminating the need for water in the system. Another nuclear application is a Stirling engine that uses nuclear fuel as the source of heat, providing years of power for use in space exploration.

In recent years an interesting idea for home use has gained momentum: Micro combined heat and power, which is a technology that generates heat and electricity from the same energy source in individual homes. It is an engine-driven generator interconnected to the grid that runs on fossil fuel, the generator produces electricity and the waste heat goes to a heat exchanger which provides hot water.

If you want to experiment with Stirling engines, we have good news for you, as it is one of the simplest engines that you can build. After 200 years of history, it is not clear if we will ever see the Stirling take a major role in the engine world, or if it will stay in niche applications. We certainly hope for the first.