Modern internal combustion engines have around 500 parts, with many of them moving in concert with the piston. But have you seen an engine with only one moving part, out of four in total? In the thermoacoustic engine, the power piston is the only part in motion. [YTEngineer] has built a very simple prototype that works on power provided by a tealight.

His little engine, slightly larger than a cigarette lighter, is composed of a test tube that serves as the cylinder, a smaller tube, called the choke, that fits inside the test tube, the stack, which is nothing more than some steel wool, and the power piston. [YTEnginer] nicely explains how the engine works: basically a temperature difference is used to induce high-amplitude sound waves that create the piston’s back-and-forth movement. The engine can be easily converted to an electricity generator by adding a magnet to the piston and a coil surrounding it.

The thermoacoustic engine is a particular type of Stirling engine. They have been proposed as electricity generators for space travel using radioisotopes as the heat source, among other applications. You may be interested in the history of Stirling engines, or perhaps even build a simple one.

END_OF_DOCUMENT_TOKEN_TO_BE_REPLACED

In the early years of the nineteenth century, steam engines were at work in a variety of practical uses. However, they were still imperfect in many ways. One particular problem were the boilers, that had a tendency to explode, causing injuries and fatalities. Reverend Dr. Robert Stirling, a Scottish clergyman, was concerned about the death toll from exploding boilers. Based on previous work by George Cayley (known for his pioneering work on aeronautics), Stirling filed his patent for a safer engine in 1816. That makes this year the bicentenary of this engine. The Stirling engine has the highest theoretical efficiency of any thermal engine. It is also a relatively simple machine. Unlike other types of engines, there are no valves, and that makes the mechanical design much simpler.

END_OF_DOCUMENT_TOKEN_TO_BE_REPLACED 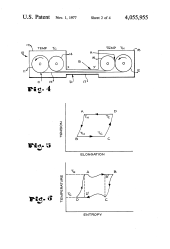 Nitinol is a kind of wire that has a memory. If you heat it, it tries to return to the shape it remembers. [Latheman666] recently posted a video (see below) of a Nitinol engine that uses a temperature differential to generate motion.

[Dr. Alfred Johnson] holds a patent on this kind of motor. The concept sounds simple enough. A Nitnol spring shrinks in hot water and expands in cold. The spring is looped over two pulleys. One pulley is geared so it has mechanical advantage over the other one so that there’s a net torque which moves the hot part of the spring towards the cold side, and feeds more cold spring into the hot water. The cold spring then contracts and the entire process starts again.

We haven’t entirely gotten our heads around the gearing, but it seems plausible. On the other hand, this video was posted on April 1. What say you, Hackaday Commenteers?

END_OF_DOCUMENT_TOKEN_TO_BE_REPLACED

Looking for a cool science experiment to do with the kids? Why not build a type of heat engine that resembles a sunflower? [Steve] from Rimstar.org shows us how!

It’s actually a pretty ingenious little project. Using metal foil scraps from a coffee bag, [Steve] created a perfectly balanced wheel that looks kind of like a sunflower. When the foil petals come close to heat they try to expand, but much like a bimetal strip, the materials making up the packaging expand at different rates to straighten the heated petal. This moves the center of gravity of the wheel off-axis, causing a rotation. As the wheel spins, the foil petal cools off, and another one is heated, creating continual movement — at least until the heat supply is taken away!

It’s a lot of work to get the balance just right, but thanks to an ingenious axle design it’s pretty easy to make adjustments. The wheel actually floats on a nail with its point stuck to a magnet, and the other end is suspended by a series of magnets. It’s pretty much as close to a friction free axle as you can get!