The 90s were a pivotal time in world history, and 1996 was no different. You might have spent the year glued to the TV playing Super Mario 64, or perhaps you were busy campaigning for Bill Clinton or Bob Dole, or maybe you were so depressed that Princess Diana and Prince Charles divorced that you spent the whole year locked in your room, a prisoner of your own existential nihilism. Whatever you did, though, it’s likely that one major event passed you by without a thought: The standardization of on-board vehicle diagnostics (in the US), otherwise known as OBD-II.

In the 1970s, vehicles (in some western countries, at least) were subject to ever-increasing restrictions on emissions. Most companies began switching from carburetors to efficient fuel injection systems, but even that wouldn’t be enough for the new standards. Cars began to carry rudimentary computer systems to manage and control the influx of valves, meters, and sensors that became the new norm. And, as one would guess, every car company had their own standard for managing and monitoring these computer systems. Eventually they would settle on the OBD system that we have today.

First, though, we should go back in time to see what led to this sea change in the automotive industry. In the beginning, the only way to diagnose a problem with a car was to investigate unusual noises, poor performance issues, or other problems directly. This can be especially troublesome on electrical problems because of their invisible nature. It was only a matter of time before someone hacked together a way to make the troubleshooting process easier. That’s partially why the first mass-produced vehicle diagnostics systems had almost nothing to do with emissions and focused mostly on helping mechanics identify common problems. 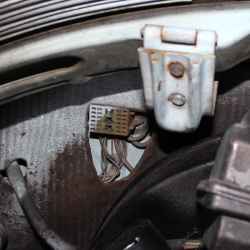 The first of these systems came online in the late 60s on some Volkswagens. (Here’s on in evidence in the author’s Beetle.) The proprietary test port that was installed in these cars gave the mechanics easy access to the electrical system via a “small” computer that could test a number of different aspects of the car. From there they could tell if lights were burned out, some information on the ignition system, and (for fuel injected cars) some information on the fuel delivery system. Even though a 1970s Volkswagen is pretty late in the game as far as old Volkswagens go (the first model year was 1938) it was still early for the industry and gave VW mechanics a leg up on troubleshooting.

The next car company to take a stab at a vehicle diagnostics system was Nissan on their 280Z sports car. Unlike Volkswagen, this system was intended to help manage the increasing demands of the fuel injection system in the post-EPA world. Not to mention the fact that the 280Z was a pioneering performance car, and any gains that could be made by using a computer to fine-tune the engine were welcomed.

After the success of Volkswagen and Nissan, other car companies saw the perks of having a diagnostics system that was easy for mechanics to plug into to identify problems with vehicles. General Motors created their own proprietary system in the 80s that helped factory workers identify problems with cars as they rolled off the assembly line. Although it’s probably not a good sign for your manufacturing process that you need to specially design diagnostic tools for brand new cars (after all, when was the last time you saw a Cadillac Cimarron on the road?), the GM diagnostic system did find some utility with mechanics for a time.

At this point there are many different car companies having equally different standards for interacting with the on-board diagnostic systems. This is where the US federal government stepped in with a mandate that all cars have a standard OBD system by a certain date. As a result, diagnostic systems really start to focus almost all of their attention to the emissions systems. The first standard was known as OBD-I and took effect gradually in the late 80s and early 90s. This system was primitive by comparison to its successor, OBD-II, which is the current standard for all cars sold in the United States since 1996. Most other first world countries adopted this (or similar) standards around this time as well. 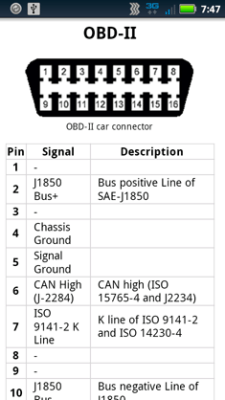 The current OBD-II standard specifies the protocols used to monitor many of the sensors in the car and can alert the driver if any of them aren’t operating properly. Most cars built under this standard have an increased number of oxygen sensors, control over mass air flow sensors and the fuel injectors, and many other aspects of the car. All of this means that there are more efficient engines on the road that all communicate in a way that makes it easy to tell why the check engine light on your dashboard came on. It also makes it easy for a mechanic to test the emissions of the car if you live in a place the requires your vechile to pass an emissions test. All the mechanic has to do for an OBD-II compliant car is plug into the OBD port and view the output on another monitor, rather than fuss with attaching sensors to the exhaust and running the car through a battery of tests.

On the other hand, there’s a lot to be desired from a system that was designed years before anyone had heard of Super Smash Bros. There’s some talk about a new OBD-III standard that would allow cars to take advantage of the growing wireless network, essentially adding “all new cars” to the list of Internet of Things devices. It would then be possible for a car to report itself to regulatory agencies, and for the car to be shut down remotely if it violates any emissions laws. While this could be argued to be a win for the environment, there are certainly concerns about government overreach and Big Brother that will need to be addressed before anything substantial is brought to market. It would have probably made it harder for Volkswagen to have cheated their emissions test results, for example, but the benefits might not outweigh the unintended consequences of something like this. Whatever the new OBD standard will include, though, it will be a welcome improvement for the aging system we have in OBD-II.

113 thoughts on “Maintenance, Emissions, And Privacy: The OBD Story”