If you are a Linux user that has to use Windows — or even a Windows user that needs some Linux support — Cygwin has long been a great tool for getting things done. It provides a nearly complete Linux toolset. It also provides almost the entire Linux API, so that anything it doesn’t supply can probably be built from source. You can even write code on Windows, compile and test it and (usually) port it over to Linux painlessly.

However, Cygwin’s package management is a little clunky and setting up the GUI environment has always been tricky, especially for new users. A project called Swan aims to make a full-featured X11 Linux environment easy to install on Windows.

The project uses Cygwin along with Xfce for its desktop. Cygwin provides pretty good Windows integration, but Swan also includes extra features. For example, you can make your default browser the Windows browser with a single click. It also includes spm — a package manager for Cygwin that is somewhat easier to use, although it still launches the default package manager to do the work (this isn’t a new idea, by the way).

Here’s a screenshot of Windows 10 (you can see Word running native in the background) with top running in a Bash shell and Thunar (the default file manager for Swan). Notice the panel at the top with the swan icon. You can add things there and there are numerous settings you can access from the swan icon. 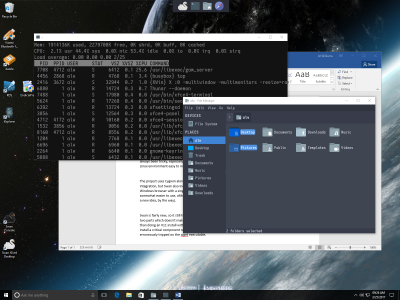 Swan is fairly new, so it still has some rough edges, but we like where it is going. The install process is in two parts which doesn’t make sense for something trying to be easier. Admittedly, it is already easier than doing an X11 install with normal Cygwin. However, on at least one test install, the virus scanner erroneously tripped on the wget executable and that caused the install to fail.

The project is hosted on GitHub if you want to examine the source or contribute. Of course, Windows has its own support for Linux now (sort of). Swan isn’t quite a finished product and, like Cygwin, it isn’t a total replacement for Linux. But it is still worth a look on any machine that you use that boots Windows.