Ben Einstein, a product designer and founder at Bolt, a hardware-based VC, recently got his hands on a Juicero press. This desktop juice press that only works with proprietary pouches filled with chopped fruits and vegetables is currently bandied in the tech press as evidence Silicon Valley has gone mad, there is no future in building hardware, and the Internet of Things is a pox on civilization. Hey, at least they got the last one right.

This iFixit-style tear down digs into the Juicero mixer in all its gory details. It’s beautiful, it’s a marvel of technology, and given the engineering that went into this machine, it was doomed to fail. Not because it didn’t accomplish the task at hand, but because it does so with a level of engineering overkill that’s delightful to look at but devastating to the production cost.

Maybe It Wasn’t Just the Engineering…

Type ‘Juicero’ into Google News and you’ll see  Silicon Valley was shaken to its core this month. The future of hardware startups is now in question. Juicero, the world’s first cold-pressed juicing system, is in a tailspin. This company that raised $100 Million in funding is now being compared to Theranos, Uber, Enron, and every other corporate pariah in recent memory. The creator of Juicero, once favorably compared to Steve Jobs is now doing damage control with every outlet available.

Maybe, just maybe, the idea of a machine that would squeeze pre-packaged crushed fruits and vegetables into juice isn’t a great idea. The machine originally cost $700 USD, and the juice packs were purchased through a subscription model for $35 per week. For $2500, you could have all the fresh squeezed juice you want for an entire year. Maybe consumers don’t like the idea of DRM in their food. Juicero was a fantastic success for its creator, as the $100 Million in funding goes to show. For the rest of us, we’re left with a fantastic lesson on when you should engineer less, not more.

Just Look at It!

Disregarding the madness surrounding a $700 juice machine that uses proprietary, DRM’ed juice packs, the idea that anyone would spend two thousand dollars on juice per year, and the concept that a machine that makes juice is a bellwether for the entire economy, one marvelous thing did come out of this little kerfluffle. We get to look at design choices the likes of which are never seen in a single product. 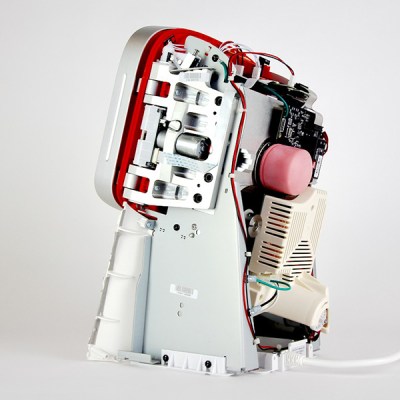 Ben’s teardown covers the huge plastic enclosure, and the eight mold revisions required to bring this product to market. If you’re not familiar with injection molding, it’s expensive, and you really, really want to minimize how many mold revisions go into your first product. The best designers can finalize a mold in two or three revisions. It took Juicero eight, probably at a cost of over a million dollars.

The teardown continues to the power supply, a massive, custom job that converts wall power to 330V DC for the motor and 3.3, 5, and 12V for the brain of the device. The ‘transmission’ for this device consists of at least five machined, hardened gears. Our ‘ol pal [AvE] will tell you machined gears are rare in the finest prosumer grade DEWALT or Milwaukee tools — they usually go with cheaper sintered metal gears. By all accounts, the Juicero is an exercise in excess. 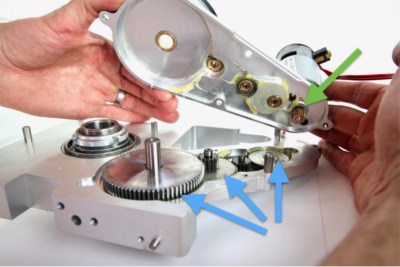 The Juicero is a machine that is overbuilt, overengineered, and the cost to make this machine prices it out of the market of people who would actually want a desktop juicing machine. While Juicero could iterate on this design for a few more revisions, replace the expensive machined parts for stamped steel, and simplify everything, even that would be insufficient. The design of the Juicero has a fatal flaw: it compresses the entire juice pack at once. That’s sixty-four square inches of fruit and vegetable pulp that must be compressed all at once. In an article that will surely be featured in next year’s Pulitzer nominations, Bloomberg discovered you can simply squeeze these juice bags. The Juicero isn’t just over-engineered. You could squeeze this bag through rollers with a simpler mechanism to get the same amount of juice out.

There’s a saying that any idiot can build a bridge that can carry a load, but only an engineer can build a bridge that barely carries a load. This is a desirable trait; a bridge that can carry any load would also carry an astronomical cost. Designing to a price point that you’ve verified by market research is engineering, and Juicero is the most spectacular failure of this type of engineering in recent memory. Of course, it doesn’t help that Juicero has DRM’ed food, but the success of K-cups tells me that’s probably not a priority for a lot of consumers.

174 thoughts on “Juicero: A Lesson On When To Engineer Less”