Technology is designed to serve us and make our lives better. When a device gets outdated, it is either disposed of or is buried in a pile of junk never to be seen again. However, some individuals tend to develop a certain respect for their mechanical servants and make an effort to preserve them long after they have become redundant.

My relationship with my first laptop is a shining example of how to hold onto beloved hardware way too long. I converted that laptop into a desktop with a number of serious modifications which helped me learn about woodworking along the way. Maybe it’s more pragmatic to just buy new equipment. But you spend so much time each day using your devices. It is incredibly satisfying to have a personal connection that comes from pouring your own craftsmanship into them.

The laptop in question is an IBM R60 which I lugged around during the first three years after I graduated. It was my companion during some tough times and naturally, I developed a certain attachment to it. With time its peripherals failed including the keyboard which housed the power switch and it was decided that the cost of repair would outweigh its usefulness.

Then came the faithful day when I was inspired to make something with the scrap wood that had accumulated in my workshop. This would be my second woodworking project ever and I did not have the professional heavy machinery advertised in most YouTube videos. Yet I had two targets in mind with this project.

Armed with mostly hand tools, a drill and a grinder that was fitted with a saw blade, I started with the IBM R60 to all-in-one PC mod. Following is a log of things I did and those I regret not doing a.k.a. lessons learned. Read on. 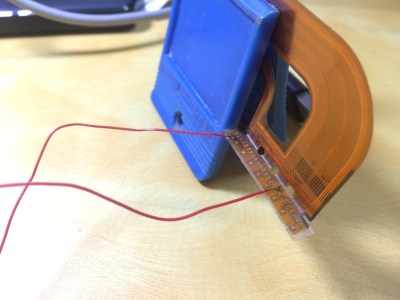 First things first. Since the keyboard is dead and the power switch is on the keyboard, I needed to figure out a way to turn it on. After a short Google search that turned up nothing useful, I decided to trace out the pins on the keyboard connector that could be used to trigger the operation. Trial and error resulted in the isolation of the two pins that were the key.

I ripped out the ribbon cable from the faulty keyboard and was able to solder two wires to the appropriate contacts. A PCB mount push button was chosen because my intention was to mount it to the side of the chassis. In the video below, you can see that the hack works as expected.

Hot glue is so useful in such cases and I applied generously to the cable to tack it along the chassis as well as the edge where the button finally rests. That solves the power-up problem and I intend to use an external mouse and keyboard for the finished system.

It is evident that the hinges had to be removed in order to be able to fold the display backward, however, another challenge awaited. The ribbon cable that connects the display to the motherboard is not designed to wrap around the enclosure like I planned and is shorter than I would have like; much shorter.

Instead of discarding the chassis and LCD covers, I made the choice that involved power tools. The idea was to cut a slot in the main chassis so as to allow the cable to easily reach its destination. After unscrewing the connector and removing it, I carefully made the necessary incision.

A cut in the battery slot, as well as the LCD back cover, was necessary and though it may not be the cleanest, it did work out. My concern here was the cable itself and as you can see in the picture above, it suffered a bit of damage.

Evolution of the Enclosure Concept

The next part was the creation of an enclosure and I wanted to use the scrap wood I had lying around. I am not an experienced carpenter, to say the least. In fact, this was my second woodworking project and I used mostly manual tools for the project. The largest part is the LCD and I took some measurements to see if I could make a small box-like enclosure.

The result was something that did not resemble an enclosure, however, I am sharing the image here because it was a starting point. The ports could all be accessed however it was not something that could be presented. I continued to test my hypothesis of the usability of the system when put to work. I installed Kali Linux since the WiFi card could be used in a multitude of ways including a honeypot for network experiments.

The hardware worked at this point leaving only the enclosure in an unfinished state. 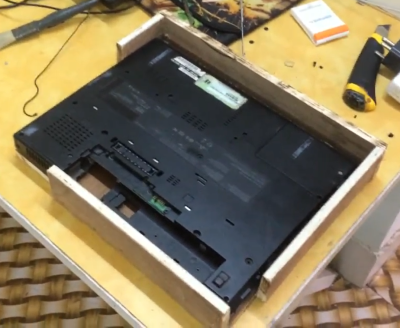 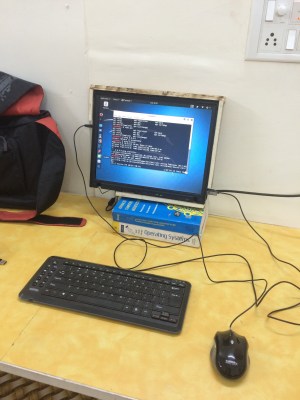 For the final design, I chose the standard all-in-one desktop form factor and decided to cut 12mm plywood into required sizes. The thick plywood meant that the completed frame would be quite heavy but it would also give me room to trim and drill if necessary.

Before I nailed everything together, I mocked it up to see where the slots for the ports and power plug would go. This is important since cutting out holes will become very difficult after things have been stitched together.

I marked everything out before I made the cuts and measured it twice since there was no scrap wood left. Instead of putting it under a saw, I decided to use a drill with a large bit to make holes.

My decision paid off and I used a circular saw to cut the rest of the slots. Normally this kind of stuff is done with a jig saw but I used my power saw with a small wood scrap for fulcrum and it worked out nicely. The resulting slots were later filed and cleaned up with the paint job. Once I was sure everything was in place, I used wood glue and nails to make the final enclosure. I took the blurry picture above, but you get the point.

The enclosure at this point was rough and not really fit for paint. The first thing to do was to add a coat of wood primer to fill in the gaps a bit. Next, I added a coat of wood filler and then sanded it down for a smooth finish. I started with 80 grit paper and move to 220 in a total of 5 steps.

The idea is to fill in any unevenness in the wood with filler and make everything plane. I then added another coat of primer and then some red enamel. I could have chosen laminates or something else but this was an experiment and an opportunity to learn. Watching paint dry was not as fun as I had hoped but I did get a glossy smooth finish at the end.

The Face That Launched the Project

The enclosure is incomplete without the front face and I had already reserved a piece for that. The size of the display was measured and marked on the designated piece. Cutting it was tougher than I thought and it is better to shave off a bit more than required since the edge will need to be prepared later anyway.

The board was primed and painted the same as the enclosure with red enamel to match with the back. The edges could use some wooden ply edges to make things smooth but I wanted to minimize my bill of materials so this had to do.

For the border on the display window, I used some white-silver plastic corner molding I had left over in the scraps. Lucky! I cut them up to the right size to the best of my abilities and used super glue to hold them in place.

To hold things together, screws should be used but they will look ugly along the white border. Improvisation led to the addition of screw holes from the back running through the ply-board all the way to the front. I used a smaller drill bit to first make the hole (end-to-end) and then a larger bit to make a counter bore.

That was the final screw and the enclosure was missing just one detail… the Jolly Wrencher. I had one from the Hackaday Prize a few years ago and I also added a few other decals to finish the job.

Woodworking in a 3D Printing World 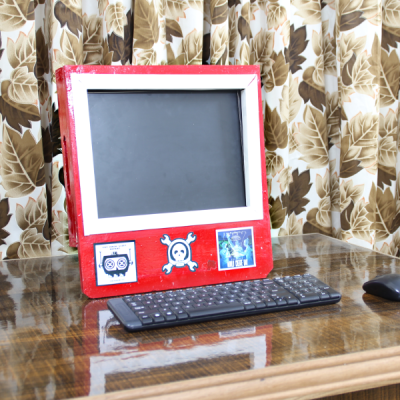 When we see projects with wooden boxes online we usually don’t appreciate the effort that went into creating it. I for one thought it would be easy and found it to be a messy experience as compared to 3D printing. Here are a few takeaways.

My old beat up laptop got a new lease on life and I plan to use it as a desktop until something terminal happens to it. The enclosure prepared has some imperfections and those make it unique. It speaks volumes about the effort that has been put into it and has increased the sentimental value of the machine.

I have learned a bit about working with wood and will be experimenting with lumber next. The only drawback I have seen is the additional weight as opposed to plastic. The advantage of being sturdy is something that can come in handy for large volume projects. Share your projects and tips and hopefully, beginners like me will get better with time.