Keep in mind that IBM loved the screen-oriented terminal (so did HP, for many years). So unlike what I think of as a normal terminal. So you move the cursor around the screen and fill out the screen. When you press enter (or certain other keys), the entire screen goes to the remote computer at once. That gives the software applications a distinctive non-interactive feel. On the HP terminals, you could force them to send keystrokes and you probably can on the 5250, but it is unusual. Normal programs are screen oriented.

For example, mostly you’ll interact with the computer via some simple menus (see below). You press a number and hit enter. The whole thing is set up mostly to run batch jobs using cryptic commands — although no more cryptic than ls and df to the uninitiated.

While you are waiting for your account, there are a few things you can do to get ready. There’s a welcome document you’ll get in your welcome e-mail that you could start reading now. There is some per user setup you may need to complete, so be sure and read that.

You can also watch some tutorial videos. There are plenty on the AS400Tutorials channel on YouTube, including a basic tutorial you can find below.

Once you log in, do your setup as explained in the welcome document, and you are ready to go. Go where? Depends on what you want to do. However, a good way to get a flavor for what interactive computing was like in the 1970’s, try issuing this command:

Actually, you can leave off the PUB400SYS/ since it is in the default search path. That will lead you to a menu where you can play state-of-the-art computer games of the day. 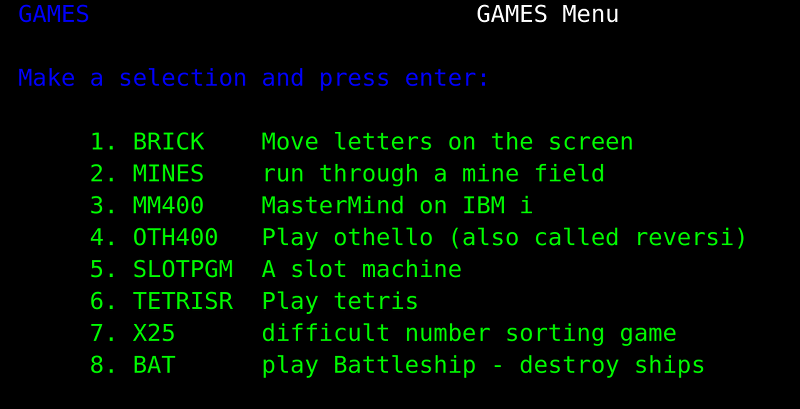 If you want to edit a file, try EDTF. There is a Linux-like shell at QSH. Don’t get too excited. I’m using Linux-like in a very liberal sense. Use “help” instead of man to see what you can do. There is an FTP client, and who knows what else. The DSPLIBL command will help you find libraries and DSPLIB will list out what’s in a library if you want to experiment.

Just browsing, it looks like there are facilities for Java, RPG, Cobol, C and C++. I’m sure Rexx is on there, too.

Is any of this practical? I don’t know. There’s still a lot of these out there chugging away. I suppose you could learn a job skill. But to me, it seems like this is an area of old computing you don’t hear much about. Before “small” computers exploded, these things were everywhere.

Keep in mind the IBM i you’ll use if you get an account is the real deal. But if you want to play with some old hardware and don’t mind it being virtual, there are plenty of browser options. You can also use SimH, and even build some hardware around it if you like.