Need to make something quick and dirty out of wooden beams, and want to use elements you know will work together? BeamCNC is a mobile assembly of stepper-controlled rollers and a router that sucks a 2×2 through it and drills the holes in pre-programmed intervals. Currently being developed as part of an Indiegogo campaign currently in preview, its creator [Vladislav Lunachev] has declared it open source hardware. It’s essentially a CNC mill that makes Grid Beam, a classic DIY building set that resembles Meccano, Erector, and other classic sets, only made full-scale for larger projects. While BeamCNC is not affiliated with Grid Beam, it takes the same general idea and automates it.

We’re not all carpenters, but most of us can make a shoddy go of it — if we have access to tools and have been trained in on them. Even that is a stretch, and extending that to making actual furniture that you could use is even more of a stretch.

Enter Grid Beam. Developed by Ken Isaac in the ’40s, the idea is to use a fairly commonplace wooden stock — the classic 2×2 beam — as an elementary but robust building-set component: an Erector set for shelves, desks, and chairs. The basic design begins with the 2x2s, which in the arcane logic of the lumberyard, have a quarter-inch cut off of each side, making the actual dimensions 1.5″ x 1.5″. Not coincidentally the holes are spaced 1.5″ apart as well, and in the classic design you drill the holes along the entire length, with an intersecting set of holes drilled in perpendicularly. Quarter-inch socket-head bolts are a typical method for securing the beams.

The official Grid Beam site sells the classic wooden beams, made out of recycled Douglas fir. They also feature steel and aluminum beams in a variety of widths, as well as entire kits featuring an assortment of beams and quarter-inch hardware to connect it all together.

Grid Beam has been in the news a bit recently. They brought a bunch of beams to Maker Faire and got a nice writeup by CNet, and recently appeared in a video interview. 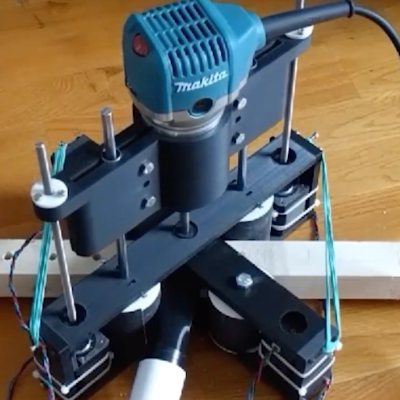 At first blush it’s easy to equate BeamCNC with an overpriced carpenter’s jig. The usual way to drill an even row of holes is with a jig consisting of a dowel offset by an inch-and-a-half. You put the dowel in the hole you just drilled, ensuring the holes remain consistent. It costs about 5 cents to make and is totally foolproof and reasonably quick — once the drill press is set up and the jig built, you could tear through an 8-foot beam in what, a minute?

By contrast, BeamCNC costs $300 without the router, and the question is begged as to how it could bring enough value to justify the price. How many linear feet do you need to drill to pay off the machine?

To appreciate the true value of the machine you have to abandon the mindset that you’re making classic wooden Grid Beam. To begin with, it’s a CNC mill controlled by G-code, so you can drill the holes in any pattern and size you want. It works with aluminum as well as wood, and I’d bet you a round tube would work just as well as a square one, or a length of channel. You can adjust its size to accommodate materials from 20mm to 50mm, or about 0.75″ to 2″. Those of you gnashing at Grid Beam’s Imperial measurements could design your own Metric standard.

The hacker’s take on this tool points to permanent builds where you only drill the holes you need. This becomes robotic measuring and drilling based on the design files you feed it. Maybe you’d need a groove only milled partway through the material. It’s a machine tool so once you have the G-code set up, all you have to do is shove the material into the machine and it rolls it through on its own. When not drilling every hole along the board, I could see you being able to rip through quite a few boards in a short amount of time.

This isn’t such a far-off idea. [Vlad] is talking about a web resource of G-code design tools, allowing users to create and share designs online. If done right it sounds like a neat rapid prototyping trick. What do you think? Does BeamCNC offer intriguing possibilities or is it just another gadget that will end up on a shelf? Leave your thoughts in comments.